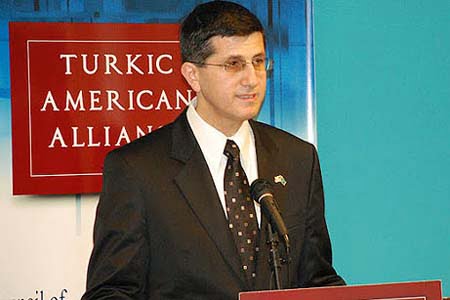 The Turkic American Alliance (TAA), the largest national Turkic organization in the US, is to hold its third annual Turkic American Convention in Washington, D.C., on March 12-13 in cooperation with the Turkish Confederation of Businessmen and Industrialists (TUSKON).

Prior to the convention, leading policymakers from Azerbaijan, Kazakhstan, Kyrgyzstan, Tajikistan, Turkey, Turkmenistan and Uzbekistan will discuss issues focusing on energy, trade and regional development in a daylong forum.

According to Faruk Taban, the president of the TAA, which represents six regional federations and over 200 community associations, cultural centers, business associations and education institutions in the US, the main goal of the convention is to elevate the importance of the Turkic diaspora in the US. Taban, who has met President Barack Obama several times in the last 18 months, believes that such meetings signal the importance that is given not only to the TAA as an institution, but the Turkic world as a whole.

Talking about the success of the TAA’s previous two conventions in terms of the interest they sparked, Taban says this year there are indicators that attendance will be even higher. He emphasized that the TAA has invited the representatives of both the governing and opposition parties in Turkey to reflect the diversity of the country to the US.

TUSKON President Rızanur Meral, whose organization is partnering with TAA to host the convention, says the goal of the gathering is to raise awareness on the importance of US-Turkish relations and explore opportunities in the field of energy and trade in Turkey. He also noted that Turkey’s economic relations with the US are short of their potential and that by supporting the convention, TUSKON hopes to create momentum in bilateral economic cooperation. “TUSKON gives great importance to ties with the US,” Meral added.

The program is expected to host ministers and politicians from Turkey, Kyrgyzstan, Azerbaijan and ambassadors of the countries that have representation in the TAA. The event, which will host panel discussions with participants from seven countries, is sponsored by Ziraatbank, Halkbank, SOCAR (State Oil Company of Azerbaijan Republic), Today’s Zaman, Turkish Airlines (THY) and Turkish Review.

Last year, 59 members of the US Congress including eight senators were among the over 700 guests at the convention. Taban said the TAA expects a larger representation from Congress this year.