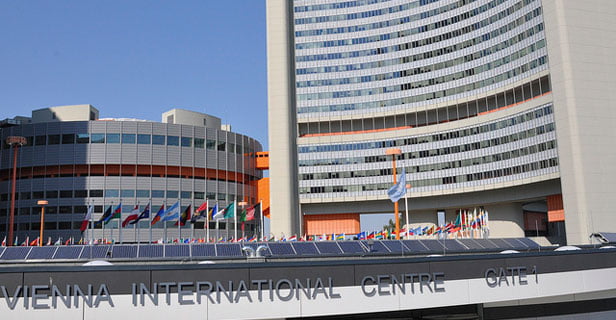 “Dynamics of Radicalism: Why are people radicalized and why?” the second of the conference series titled “Combating Violent Extremism,” co-organized by the Journalists and Writers Foundation’s (GYV) Abant Platform and Vienna-based Friede-Institut für Dialog (Peace Institute for Dialogue) was held at the United Nations Office on Drugs and Crime (UNODC) in the UN headquarters in Vienna, with emphasis on the need for increased role of civil movements in combating terrorism.

Focusing on the escalating violence in the Muslim geography, Dr. Ali Bulaç put the spotlight on the concept and types of Salafism. “Salafism should be discussed in three categories,” Bulaç said, pointed out that the first type of Salafism is the intellectual/procedural Salafism and it mainly seeks to interpret and practice Islam in its original form. Bulaç explained that the second type of Salafism is the invitation-centered Salafism, which prioritizes spiritual guidance and combating idolatry, as seen in movements like the Muslim Brotherhood and Jamaat-e-Islami. He described the third strand of Salafism as takfiri Salafism, which is exemplified by extremist groups such as the Islamic State of Iraq and the Levant (ISIL), al-Qaida and Boko Haram.

Bulaç discussed the takfiri Salafism extensively, stressing that they seek to kill Alevis, Rafida and Sufis. Noting that they also kill the Sunnis who refuse to swear allegiance to their self-declared Caliph, Bulaç stated that takfiri Salafis paradoxically do not meddle with non-Muslims and they just collect taxes from non-Muslims. Bulaç also talked about the ISIL, which is a takfiri group that makes the caliphate its focal point, drawing attention to the fact that the ISIL has members from 80 countries. Underlining the revolt against global injustice, the current state of Palestine, the defeat of Arabs by the West, etc. as factors playing into hands of the ISIL, Bulaç pointed out that in Turkey, some radical young people are driven to the ISIL due to such factors as the state tyranny, authoritarian secularism and failure of Turkish modernization.

Bulaç further maintained that the ISIL can also attract some Kurds due to the likelihood of the establishment of a secular Kurdish state and emphasized that military methods will short of defeating the ISIL. Rather, he argued, dialogue should be established with these groups in a religious setting as distorted views of Islam historically lent legitimacy to these groups. Bulaç indicated that the problem has roots at a deeper level and is exacerbated with misconceptions of Islam and suggested that combating terrorism depends on correct interpretation of Islam and the elimination of sociopolitical injustice.

Another speaker was political scientist Dr. Stefan Malthaner, who focused on the reason why violence is on the rise among young people in Europe and what can be done to address this problem. Noting that the young people who are prone to violence tend to establish a special communication network among themselves after they are cast out, Malthaner indicated that these young people get under the influence of small radical groups. Using graphs, Malthaner drew attention to the fact that some young people who are excluded from family and society contact terrorist organizations through local networks. To curb violence, he argued, the bonds of these people with the society should be reinforced and continuous contact should be kept with these small groups. Pointing out that the most important stage is when these young people make up their mind for conducting radical terrorist attacks, Malthaner stated that efforts should focus on how to discourage them from these acts.

GYV’s programs at the UN to continue

The meeting was held as part of the 25th session of the UN Commission on Crime Prevention and Criminal Justice, and the UN experts on the matter put the spotlight on various aspects of terrorism with their remarks and questions. Also, the GYV announced that there will be other meetings in coming months to be held to discuss terror and radicalism from various perspectives under the “Combating Violent Extremism” series.

Source: The Journalists and Writers Foundation , May 26, 2016