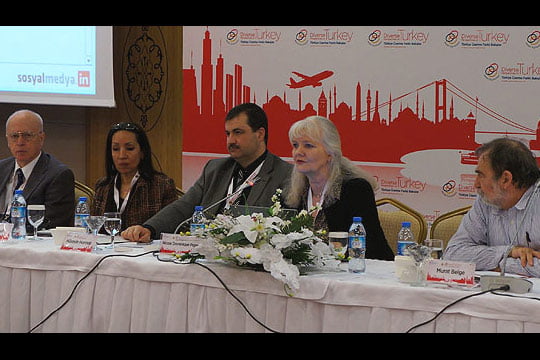 In the second day of discussions at the 28th Abant Platform meeting, participants leveled criticism at both Turkey and the EU while reiterating support for Turkey’s membership process at large.

It was agreed that although Turkey’s long-term interests lie in EU membership, both sides suffer from fatigue as Turkey’s disappointment leads to a decrease in its appetite for the EU.

Moderator of the session, titled “EU Negotiation Process and the Current Situation,” and Today’s Zaman columnist Nicole Pope said that Turkey is sending mixed signals to the EU through Prime Minister Recep Tayyip Erdoğan, while President Abdullah Gül supports the EU process. However, criticizing the rise of Islamophobia in Europe, Pope said Turkey is not always treated fairly by the EU. Referring to research by the Center for Economics and Foreign Policy Studies (EDAM) in January, Pope said that two-thirds of Turks are skeptical of the EU.

Pope underlined the shortcomings of Turkish democracy as she said, “Gay rights or the gender dimension are barely discussed in Turkey,” adding that in terms of representation of women in politics Turkey lags way behind Europe.

François Naucodie from the Turkey delegation of the EU said that the EU has not collapsed, as he reminded all of the latest approval of the 2014-2020 EU budget of the EU while adding that the bloc is a successful peace project.

Drawing attention to the importance of cultural exchange between the EU and Turkey, Naucodie said despite the economic crisis, the share of Europe in Turkey’s trade is 38 percent while 80 percent of the foreign direct investment in Turkey in the first half of 2012 was from Europe. He underlined that admission is a “work in progress.”

Similarly, Shemeikka Pekka from the Embassy of Finland said, “The EU will come back stronger.” He stated that the relations between Turkey and the EU are clearly a win-win situation.

“The burden is on the shoulders of the intellectuals to tell the people that the EU is not about money,” Dr. İhsan Yılmaz from Fatih University said while speaking at the meeting. However, he noted that there is “EU fatigue” not only among politicians, but also among intellectuals in Turkey.

In a critical remark, Dr. Gökhan Bacık from Zirve University said that Turkish actors are no longer interested in the EU process with the exception of President Gül. In strong criticism of Europe, he added that the visa process of some EU countries has “semi-racist elements.”

According to Dr. Savaş Genç from Fatih University, however, it is not only the government, but also opposition parties in Turkey that have no interest in the EU. He equally criticized European political parties for opposing Turkey’s membership. Denying that all parties are against Turkey, Today’s Zaman columnist Joost Lagendijk said that it is “a couple of big countries that are against Turkey” as he expressed his optimism in the long run.

Professor Hans Köchler, the president of the International Progress Organization (IPO), said Turkey needs to be present in Europe, but its membership has become an issue of populist policies. He also argued that social democrats in Europe are not really in favor of Turkey’s membership due to the concerns of trade unions over competition.

Klaus Wölfer, the Austrian ambassador to Turkey, stated that his own country also waited at the gates of Europe for a long time as he directed attention to the size of Turkey.

Criticizing European politicians and the media, Dr. Uğur Kömeçoğlu from Süleyman Şah University said, “The center-right parties are failing as far as Turkey’s membership is concerned.” When a politician like Angela Merkel says that multiculturalism has failed in Germany, it can have repercussions, he added.

Professor Bekir Karlığa, chairman of the National Coordination Committee of the UN Alliance of Civilizations and the founding president of the Civilization Studies Center, said that the EU began to follow the “wrong route” in 2005. Referring to the Prime Minister Erdoğan’s remarks on the Shanghai Cooperation Organization (SCO), he stated that the prime minister does not mean to reject the EU, but he has a desire to force the EU to make a decision on Turkey.

“If you only care about wealth, the West is not the only example, but if you also care about democracy, the West is still the only option,” writer Mustafa Akyol said in reference to the values represented by the EU.

Cemal Uşşak from the Journalists and Writers Foundation (GYV) remarked that the public opinion is directed towards a false expectation that there is an alternative to the EU.

Kurdish intellectual Ümit Fırat said that Kurds as a group provided the greatest support to the EU because the EU means the democratization of Turkey. Joining others in the criticism of the visa procedures of the European countries, Fırat said that he feels humiliated whenever he applies for a Schengen visa.

The meeting is expected to continue until Sunday afternoon with panels on Turkey’s new constitution and a debate on inclusive democracy.