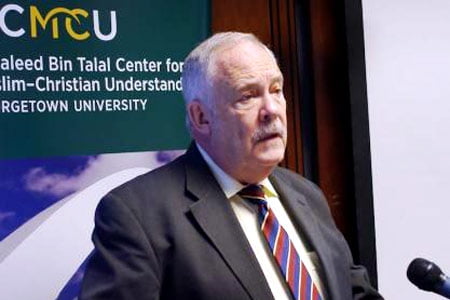 Hizmet (Gulen Movement) was discussed by Turkish and American academics at a panel titled “Hizmet: A Transnational Social Movement with Participants in Turkey, the US, and around the World” at Georgetown University.

The panel co-sponsored by Rumi Forum was moderated by Prof. John O.Vall, Georgetown University professor of Islamic History. Among the highlights, Prof. Thomas Michel, SJ.  commented that Hizmet Movement cannot be compared to other civil institutions as a unique and unshakable spiritual unity exists among its volunteers.

The presentation reviewed a social movement, known as Hizmet, originated by observant Muslims around the ideas of Turkish scholar, preacher and social advocate Fethullah Gulen. The movement combines personal spiritual development with social responsibility. Primary areas of activity include education, dialogue, media, healthcare, and disaster relief. Recently the movement and its source of inspiration, Mr. Fethullah Gulen, attracted attention due to political developments in Turkey and the controversy around public schools in the U.S. In Turkey, the struggle for democratization brought the movement to the limelight as many adherents of the historically authoritarian military-judicial tutelage system were brought to civilian courts by alleged Gulen sympathizers. Questions about the future of Turkish democracy, Kurdish citizens, freedom of the press, the authoritarian tendencies in the political system and the movement’s role in this context were discussed by Turkish and international media. In the U.S. the nature of Gulen’s influence on Turkish-American teachers who work at highly successful public schools were brought to the national attention. This presentation examined the history, activities, organizational nature and motivational factors within the movement and responded to some of the questions and allegations regarding what appeared in the mass media.

Underscoring his non-Turkish and non-Muslim identity, Prof. Michel noted that he has been observing the movement for years now and come to the conclusion that its primary mission is to combat ignorance, poverty and disunity, the three enemies of Muslims according to Said Nursi. He said Fethullah Gulen, as a scholar inspired by Said Nursi, reflected and built up on this view. “This gifted scholar, Fethullah Gulen declared war on the same three enemies by mobilizing people to establish a wide range of institutions. Kimse Yok Mu against poverty and dialogue initiatives against disunity exemplify these institutions. There are over 200 of those dialogue institutions operating in the US alone” Michel said. Additionally, “The movement cannot be compared to other civil institutions in the sense that a unique and unshakable spiritual unity exists among its followers, which others lack.” he claimed.

Later on, Alliance of Shared Values President Prof. Alp Aslandogan gave a presentation examining the movement under the categories including media, healthcare and dialogue. According to Prof. Aslandogan, the movement’s sympathizers share common grounds on values such as personal spiritual development, social responsibility, dialogue, peace building and equality. And the movement was pioneered by Fethullah Gulen in Turkey.

Calling attention to Gulen’s preaching background, Aslandogan said: ” Unlike typical preachers, Gulen reinterpreted Islamic tradition while staying true to the past and traditions. With his decent personality, he convinced and appealed to people and eventually gained their support.”

The panel in cooperation with Rumi Forum was held in Georgetown University Bunn Intercultural Center.