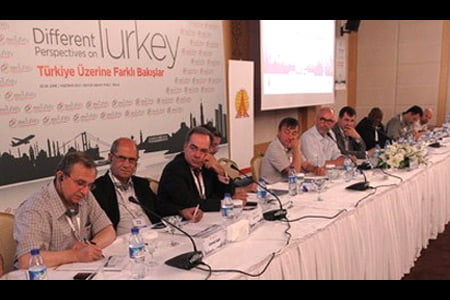 1- Turkey’s culture is at present characterized by a susceptibility to in-group / out-group tension, the effects of which impede democratization. Authoritarianism and patriarchal hierarchy are aspects of group culture that are reflected at the family level and scaled up to the political level as majoritarian democracy and internally undemocratic institutions. Two basic institutions that reinforce these patterns are family and education.

3- Individual rights cannot be ensured without rule of law because if people cannot rely on the state to act fairly and to protect their rights, they must turn to groups for this. Their rights are then dependent on the group. This is especially important for vulnerable groups such as women.

4- Turkey needs a liberal democratic constitution effectively protecting human rights. Turkey has made considerable progress in terms of democratization. It should be noted that the transition takes time.

5- Diversification of Turkish foreign policy is positive. Thegap between Turkey’s ambitions in the MENA region and its capabilities to fulfill them should be narrowed.

6- Perception of Turkey as a role model in the MENA region is related to its economic success and also political developments. Its ability to carry out this role will also depend on its success in democratization.

7- Adding new dimensions to Turkey’s foreign policy, including advanced relations with Middle Eastern and other neighbors, does not replace the importance of full EU membership for Turkey.

8- The period preceding 2015 is a great opportunity not only for Turkey, but also for Armenia to rethink how to deal with the events of 1915.

9–Turkey’s EU accession process while it includes reciprocal economic benefits is mainly about reciprocal improvements in values, standards
and democracy.

10- We welcome visa liberalization process with the final aim of lifting the visa requirements. This will show that the EU matters in the daily life of the people and will hopefully revive enthusiasm for joining the EU.

11- The deadlock in Turkey’s accession processis a result of the Turkish government slowing down efforts towardsaccession and the EU and the EU member states blocking chapters.

12- Turkey’s economy has made remarkable progress during the past decade. However success has brought with itself serious problems, including current account deficit. Diversification of trade while maintaining existing partnerships is necessary in order to minimize risks.

13- The government should continue investing in education and infrastructure with a special emphasis on innovation, added value and inclusion.

15 – The existing polarization in Turkey’s society has direct positive and negative effects on media. On one hand it allows a rich variety of opinions being reflected in media outlets, strengthening the culture of pluralism and democracy. On the other hand it leads to biased reporting which creates lack of trust by the public in the media and a lack of empathy between media groups.

16 – The criminal code and the values are still focused on protecting the interest of the state or organizations and groups rather than freedom of speech and the rights of individuals, resulting in legal harassment, incarceration and general indifference to victims of harassment.

17 – Problems in Turkey’s media relate to professionalism, work ethics, freedom of speech, corporate relations and political-cultural influences which for example result in gender discrimination within the profession. However, these problems are not unique to Turkey and they manifest all over the World in different proportions.

18 – Minority newspapers should not be ignored and they should be treated equitably.

19 – Journalism curricula must include classes that relate to fundamental aspects of this profession such as ethics, reporting and responsible media.

20 – Diminished income levels and labor rights in the media sector is making journalism less attractive and causing human capacity loss as qualified people distance themselves from the sector. It also makes journalists more vulnerable to influence.