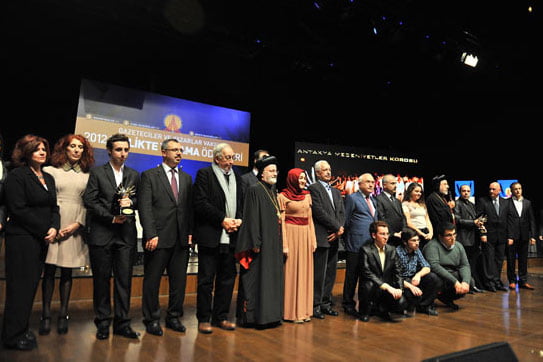 The Journalists and Writers Foundation held an awards ceremony on Sunday to honor the country’s minority groups. (Photo: Today’s Zaman)

The Journalists and Writers Foundation (GYV) has largely honored Turkey’s minority groups and oppressed voices with its landmark 4th Coexistence Awards in the hopes of giving a stimulus to those promoting peaceful coexistence with a sustained effort despite scarce resources.

The awards ceremony attracted thousands of spectators, including officials, intellectuals and public figures, who on Sunday night in İstanbul’s Congress Center expressed their solidarity and approval with a loud standing ovation for awardees not often heard of but recognized for their courageous strides in their bids to mitigate animosity and rebuild peaceful coexistence.

Notions of peaceful coexistence, GYV Chairman Mustafa Yeşil stressed in his opening speech, made up the prevailing theme of the night, where mostly minority groups in Turkey received awards for their outstanding work — often laden with symbolic significance — that helps promote the coexistence the Turkish public has longing for.

Sunday’s awards ceremony was the 4th of its kind, the last being presented in 2010 and the first in 1995. The related Twitter hashtag #birlikteyaşamaödülleri was one of the top trending topics of the night. The event was broadcast live by Mehtap TV.

The GYV was founded in 1994, and the mission and work of the foundation is inspired by GYV Honorary President Fethullah Gülen. Gülen, known for his teachings of “hizmet” (service), tolerance and dialogue, has attracted a large number of supporters in Turkey and Central Asia and increasingly in other parts of the world.

The highest-level public official who blessed the evening with his messages of peace and dialogue was Cemil Çiçek, speaker of the Turkish Parliament, who condemned the use of violent practices to express grievances and pointed to channels of democracy he said were “still open.”

“Solitude belongs only to God,” Çiçek underlined, adding that people have no right to choose their race, land, family and culture. The speaker said the most important task assigned to people is to make life more beautiful and that conflict among people over things they didn’t choose “makes no sense.”

Çiçek blamed lack of love among people as the chief culprit in sowing the seeds of animosity and said people in Turkey cannot display shared efforts to make each other happy.

Çiçek said it is absolutely necessary for everyone to maintain peace and added that “our shared identity is that we are all human. The rest of the things are just details.”

The first award, honoring a renowned professor in the category of Scientific Research, went to Nilüfer Göle. A Paris-based sociology professor, Göle, is known for a number of research projects and books on the subject of Islam and Europe. She is currently teaching at L’Ecole des hautes études en sciences sociales (EHESS) in Paris and author of several books that have been published in several languages.

İstanbul Governor Hüseyin Avni Mutlu presented the award to Göle, who said one needs to be sensitive to the injustice others are victim of.

The Literature Award, given to Turkey’s bestselling author Elif Şafak in 2010, was presented to Hilmi Yavuz — poet, philosopher and Zaman daily columnist.

The jury decided to present this year’s Print Media Award to Armenian weekly Agos — whose editor-in-chief Hrant Dink was murdered in front of his office in 2007 — a decision largely driven by a recent lead story in the paper slamming an anti-Islam movie that denigrated the Prophet Muhammad.

The Visual Media Award went to Dünya TV, a TV station based in Gaziantep on the Syria border, which is also the only private TV channel broadcasting in Kurdish. Çiçek presented the award to the chief of the TV channel, which broadcasts Kurdish programs that promote peace and coexistence.

The Exemplary Behavior and/or Initiatives in the Public Sphere Award was presented to students of Mümtaz Turhan Social Sciences School and Private Getronagan Armenian High School for their outstanding project called Aşure/Anuşabur. A group of Turkish and Armenian students launched a project to travel across Turkey and meet other cultures and see if they could coexist together.

The students received the awards from Zaman Editor-in-Chief Ekrem Dumanlı and Koçyiğit. The Zaman chief said youth in the 1980s were subjects of “futile conflicts” and added that those who survived understood that these conflicts are useless.

Turkcell CEO Süreyya Ciliv said his company will award one year of Turkcell credit to the students free of charge.

Antakya Civilizations Chorus, which contributes to “brotherly coexistence” with their songs, was presented the Visual, Auditory Arts and Stage Arts Award.

The two Social and Cultural Understanding Awards went to Saliba Özmen, the bishop of the nearby city of Mardin and Chairman of Veysel Karani Foundation in Batman, 86-year-old Hacı Mirza Demir.

The Special Jury Award went to Monsignor Georges Marovitch, a former Vatican diplomatic official in Turkey, who died this March.

Peace Islands Institute director Ercan Tozan welcomed his guests and thanked everyone for their continued service to the community.