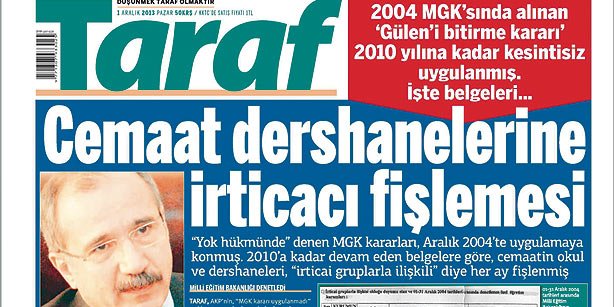 The Turkish government classified, categorized and monitored a number of educational institutions in some way linked to Hizmet, a faith-based movement inspired by Turkish Islamic scholar Fethullah Gülen, until 2010, a Turkish daily reported on Sunday.

The reporting is part of a series of leaks the daily published in the past few days unveiling a National Security Council (MGK) document that asks the government of Prime Minister Recep Tayyip Erdoğan to finish off Gülen and curb his activities, both in Turkey and abroad. The document, endorsed in 2004, was signed by a number of officials, including Erdoğan, then-Foreign Minister Abdullah Gül and then-Justice Minister Cemil Çiçek.

On Sunday, the Taraf daily published five documents which list private educational institutions, including both regular schools and prep schools, that are “suspected of having links to reactionary activities.” The report was a response to a government narrative that the 2004 MGK decision was “null and void” for the government and that the authorities never implemented its recommendations.

The documents show that inspectors linked to the Prime Ministry monitored and categorized the schools every month up until 2010, when the government abolished the Prime Ministry Implementation Monitoring and Coordination Council (BUTKK), a body that was set up to monitor “reactionary activities” after Feb. 28, 1997 post-modern coup.

The Feb. 28 military intervention, called a “postmodern coup” because it was carried out without the use of arms, occurred when military generals confronted a civilian coalition government at an MGK meeting on Feb. 28, 1997, which resulted in the forced resignation of the government led by a now-defunct religious-minded party. The period following Feb. 28 was characterized by mass human rights violations in Turkey, and conservative groups were put under immense pressure.

The MGK is the top state body created by the 1960 military coup. It was seen as a shadow government while the military was in power. Furthermore, it ruled the country directly from 1980 to 1983 before transferring power to the civilian government.

The document has sparked outrage in Turkey, with opposition parties criticizing the government for lying to the Turkish people while intellectuals have slammed the government for endorsing an MGK decision that is seen as a plot against the country’s citizens.

Erdoğan has yet to make any remark on the document, which also bears his name. Many pro-government columnists claimed that the government had to sign the document in order to, as a matter of fact, protect the Hizmet movement from the wrath of the military, which had a strong role in politics.

On Friday, Taraf published a document, signed only two months after the MGK decision, in which then-Prime Ministry Undersecretary Ömer Dinçer orders that steps should be taken to monitor “reactionary activities” with regular reporting back to the Prime Ministry. Taraf provided the document as evidence that the national security document was in fact implemented during the Erdoğan’s government.

Dinçer, who was appointed as education minister in 2011, told reporters on Saturday that the 2004 MGK decision was not implemented and that the document Taraf published is a separate process, a remnant of the previous government, which was determined to fight against “reactionary religious activities.”

He said the MGK decision in 2004 was only a recommendation to the government and the government didn’t bring it to the agenda of the Cabinet and shelved the policy recommendation by the MGK. He noted that the document Taraf published, which bears Dinçer’s signature, is an extension of activities endorsed after the Feb. 28, 1997 coup.

Dinçer said the government headed by Prime Minister Mesut Yılmaz after Feb. 28, 1997, drafted an action plan to monitor and fight against religious groups, including Gülen and the Hizmet movement. To coordinate and implement this action plan, the government established BUTKK at the Prime Ministry.

Dinçer accused the Taraf daily of not being aware of bureaucratic processes, formal written correspondence or the Turkish legal system. This, Dinçer claimed, led Taraf to interpret his letters as part of the MGK decision endorsed in 2004 and confused these two “completely different and separate things.”

He said the written correspondence about the action plan to “fight against reactionaryism” cannot be presented as an action plan against the Hizmet movement.

Deputy Prime Minister Bekir Bozdağ voiced similar remarks and said Dinçer’s correspondence is different from the 2004 MGK decision. He said the correspondence is part of routine work of the BUTKK, which “we abolished in 2010.”

In a response to Dinçer and Bozdağ, Taraf published five detailed documents that recorded the inspectors monitoring schools and prep schools linked to the Hizmet movement. The reason for the monitoring was given as “links between the educational institutions and reactionary groups.”

Justice and Development Party (AK Party) Deputy Chairman Mehmet Ali Şahin, who was a MGK member in 2004 but couldn’t attend the meeting because of a trip to Athens, said the decision was in fact signed to protect the Hizmet movement. He said he would also have signed the document, pointing to the military tutelage system that was dominant in Turkey.

In a first public comment on the issue, Gülen described himself as “speechless” and expressed his disappointment about the MGK decision in 2004.

Gülen stated that if the government had not undertaken steps to close the prep schools, a move strongly decried by the Hizmet movement, he would have given the government the “benefit of the doubt” and considered the document something “circumstantial.”

“What was required for the benefit of the doubt was this: We don’t know the conditions of the time. We weren’t acquainted with the matter so that we could know its background and assess it with its philosophy. This is how I would have looked at it if it had not had a continuation,” Gülen said in statements released on his website, herkul.org, on Sunday.

“But after statements confirmed the document, not only did I feel shattered, I am left speechless,” he added.

Meanwhile, Felicity Party Chairman Mustafa Kamalak said on Saturday that it doesn’t make sense to discuss the authenticity of the document and described the document as “unacceptable.”

He said the government’s plan to shut down the prep schools is reminiscent of the Feb. 28 coup process and is the opposite of the “national will.”