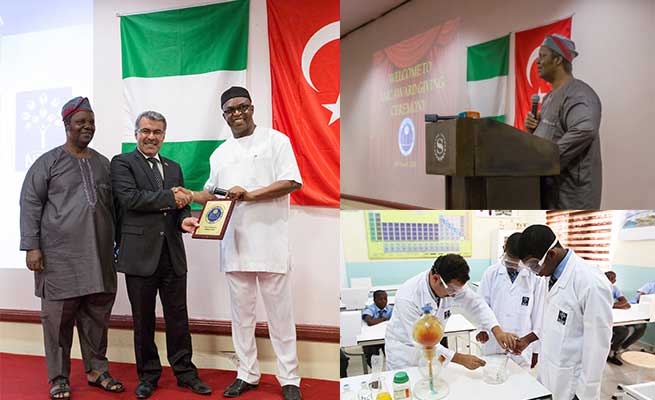 The feat was achieved in the field of Mathematics, Physics, Biology, Chemistry and Computer Science, setting an all-time record.

Minister of State for Education, Professor Viola Onwuleri, said the feat was not a surprise because the NTIC had laid a solid foundation in sciences.

“This is a school (NTIC) that has made so much mark in Mathematics and Sciences,” she said.

Presenting the awards to the NTIC’ s Group Managing Director, Mehmet Basturk, Prof Onwuliri praised the management of the college for ensuring that quality students emerge from there.

In his remarks earlier at the awards ceremony, the Director and Chief Executive Officer of National Mathematical Centre, NMC , Prof Adewale Solarin expressed satisfaction with the system put in place in all NTIC schools, which has seen Nigeria winning laurels in international Olympiads.

“I am very impressed with the kind of system NTIC has in place, so I am not surprised that we have to celebrate their achievements,” the Director said.

Speaking further, he commended the partnership between NMC and NTIC, saying that the symbiotic collaboration has led to enormous gains in stimulating students’ interest in mathematics.

“NTIC has been a formidable partner of NMC. If we want to look at the achievements we have had so far in international competitions starting from Pan-Africa Olympiad, NTIC contributed significantly to the numbers of medals we have.

“If we look at the international Mathematics Olympiads and Physics Olympiads in which we have had six medals so far, five of the medals can be associated to NTIC,” he added.

For Basturk, the commitment of the school is to constantly improve on the excellent performance so far recorded.