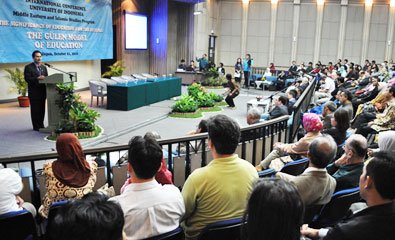 The “The Gülen Model of Education” conference in Indonesia drew 32 academics from 14 countries as speakers, who discussed Gülen’s ideas on education

The conference, titled “The Gülen Model of Education,” drew 32 academics from 14 countries as speakers and was organized jointly by the University of Indonesia, Syarif Hidayatullah State Islamic University (UIN) Jakarta and the Fethullah Gülen Chair of UIN Jakarta.

The opening ceremony of the conference was held at the Grand Melia Hotel in Jakarta on Oct. 19 and was attended by nearly 200 participants, including high-level Indonesian bureaucrats as well as local and international academics.

The head of the Fethullah Gülen Chair, Ali Ünsal, delivered a speech at the ceremony and said Gülen’s thoughts have been a model for the world’s people and that this model aims to bring up a generation whose members are bred with love, are hardworking, have moral values and are open to dialogue, regardless of their religion, race and color.

The head of the conference’s organizing committee, Mustafa Özcan, also addressed the participants and said the schools pioneered by Gülen across the world provide distinguished education. Stating that these schools are sources of pride for the countries they are located in and that they raise children who both respect differences and adhere to their own values, Özcan said he hopes the number of such schools increases in Indonesia.

Indonesia’s former education minister, Yahya Muhaimin, was also among the speakers at the opening ceremony and said Gülen’s understanding of education is something that Indonesia sorely needs.

Gülen is a Turkish Islamic scholar well known for his teachings promoting mutual understanding and tolerance between cultures. One of the world’s most influential Islamic scholars, Gülen came out at the top of the list of “The World’s Top 20 Public Intellectuals” according to the magazines Foreign Policy and Prospect in 2008. Now residing in the US, Gülen has written nearly 50 books in Turkish, some of which have been translated into multiple languages.

Gülen sent a message to the conference expressing regret that he was unable to attend due to health problems. Extending his gratitude to the organizing committee, participants and speakers for their sincere efforts, Gülen expressed hope for the conference to conclude successfully and to bring good results.

A total of 32 academics from 14 countries presented their articles during the conference, which was held at the University of Indonesia and UIN Jakarta. The rectors of the two universities delivered opening speeches at the two-day event. The rector of the University of Indonesia, Gumilar Rusliwa Somantri, and that of UIN Jakarta, Komaruddin Hidayat, expressed pleasure at hosting such a significant conference at their universities.

MAHMUT ÇEBİ  August 8, 2012 Fethullah Gülen has so far been designated with numerous titles: Islamist, pro-Christian, pro-sharia, pro-Vatican, pro-ummah, pro-Turan (Turkish ethnic nationalist), pro-American, pro-Israel, Calvinist, etc. Those who never listened to him or read his books have attacked him with as many defamations as they wished. But these decades-long groundless attacks have never […]