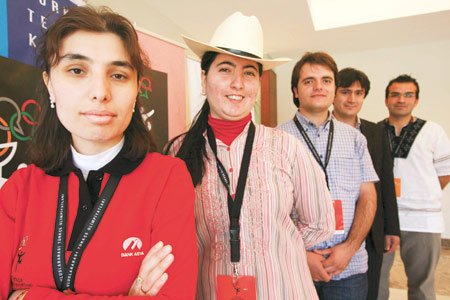 Selfless Turkish teachers never hesitate to go wherever they are needed, and are always quick to win the hearts of people when they arrive, an accomplishment largely due to their determination to acquaint themselves with the culture and language of their new home.

The majority of them being polyglots, these teachers themselves become a cultural mosaic during the years they spend abroad among so many different peoples, a process that in turn benefits their own country. Their stories become Turkey’s stories and they are its windows onto the world — windows that will never close again.

Muhammed Azad Boztaş is one of these teachers. He went to Tanzania five years ago, when people in Turkey wrongly associated Tanzania with the Tasmanian devil. When he graduated from the teachers school of the Celal Bayar University he was told he was needed in Tanzania as a Turkish teacher, and he did not hesitate for a second before setting off. His wife was expectant and their baby was due in two months, by which time he would be in Tanzania. He could not come to Turkey even once a year because the high cost of tickets and the length of the flight (a full 24 hours).

He speaks Turkish, English, Arabic and Swahili, spoken throughout much of eastern Africa. Boztaş notes that Turkey is the only white nation without negative associations among Tanzanian Africans, thanks to the Turkish schools in the country. While they call all other white people “mzungu,” they call Turks “mturuki” to distinguish them. He says he has come to learn that many of the stereotypes of Africa that abound in Turkey are far from correct, and that its people are very warm and hospitable — just like Turks. Boztaş now has the necessary language skills and courage to travel through almost the entire African continent.

Another of these altruistic teachers is Sinan Güven, from the eastern Turkish province of Erzincan. After finishing high school, he went to Abkhazia study and stayed there for five years. He studied in the faculty of education there to become an English teacher. After graduation, he spent some time in South Africa and then headed for Mozambique. He had a tough time adapting to the hot climate of Mozambique after the freezing winters of Abkhazia but has been a teacher in the Turkish school there for three years.

Quite aside from health problems, he also faced a more serious threat in the course of his work in Mozambique. While driving to collect a friend who had gone to fetch water he was stopped by thieves who took all of his valuables and then took him to a deserted spot. As he prayed, while they prepared to slit is throat, a police car happened to be passing and the gang fled. Although baring mental and physical scars from the incident, he has no intention of leaving his post. Having learned about Africa through Mozambique and about Russia through Abkhazia, Güven has literally become a world citizen. “While teaching Turkish to world citizens I also get to learn their different cultures and languages. This is a great benefit for both me and my country,” he says.

Sevgi Yüksel, from the central Anatolian town of Yozgat, has been teaching Turkish in Romania for nine years. While working as an assistant teacher in the Turkish schools in Mongolia, she studied international relations and trained to become an English teacher. During her stay she met her future husband, Ali Yüksel, an IT teacher, and they married there. They worked in Yakutsk for a year before moving to Romania almost a decade ago. Sevgi Yüksel speaks Turkish, English, Romanian and Mongolian. Going to different countries was at first a very difficult task for an unmarried girl, as she was then, but that she got used to it. Now the mother of two girls, she is proud of her girls and their close interest in their surroundings and considers it a great advantage to be exposed to other cultures and languages.

Asım Şimşek is a young man from the Anatolian province of Sivas. After his graduation from the faculty of education at Selçuk University in Konya, he went to Ukraine, where he has now been for 11 years. “I have now become a Ukrainian,” he explains. So far, he has taught Turkish to hundreds of Ukrainians at his school, Odessa Black Sea High School. He points out that Ukrainians don’t look favorably upon Turks because of certain historical issues, but that they have started getting to know the real Turkey through the Turkish schools. Şimşek emphasizes that Turkish teachers inspire members of different cultures to know and love each other wherever they go. “We are learning about Ukraine and they are learning our culture. My two daughters are growing up learning about both of the cultures,” he notes, adding that he is not thinking about moving back to Turkey, but is leaving the door open for the chance to teach Turkish in other countries.

Albanian Fatma Shyti’s story is an interesting one. She graduated as a student of Turkish studies from Mehmet Akif College in Albania. While studying, she worked as an assistant teacher in Turgut Özal College and taught Turkish at Mehmet Akif for two years. Shyti went to the United States two years ago and now teaches Turkish at the Horizon Science Academy. She speaks Albanian, Turkish, English and Italian and is very happy to teach Turkish to American kids. Underscoring that being in touch with children means finding out about their worlds, Shyti says, “We teach them our own culture, and in turn we learn about theirs.”

The story of Azeri Yagut Bahşeliyeva is a little different from that of other Turkish teachers. Yagut finished her studies in international relations in Baku, and received a job offer from the Foreign Ministry, but she chose to become a teacher rather than a diplomat. Also, although she gained admission to two British universities, she chose to go the United States to work as a Turkish teacher rather than pursue post-graduate studies. While yearning to become like Tansu Çiller, Turkey’s first and only female prime minister, she found herself teaching at the Dove Science Academy in Tulsa, Oklahoma. She speaks Russian, English, Turkish, French and Italian and plays the piano very well. Bahşeliyeva also teaches Turkish to the other teachers in the school.