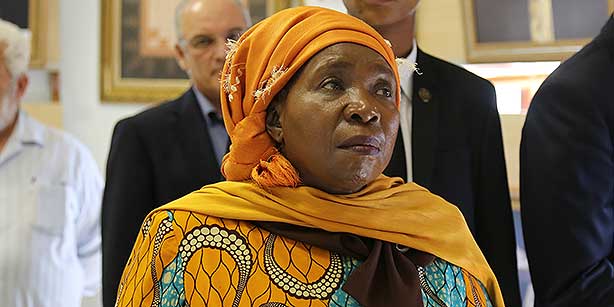 Dlamini-Zuma was visiting the Nizamiye Külliyesi, an Ottoman-style mosque complex that was built in the South African city of Johannesburg in 2013 and sponsored by Turkish businessman Ali Katırcıoğlu.

During the visit, Zuma was accompanied by Katırcıoğlu and many other Turkish education volunteers. She said: “I’ve been following this enormous project. However, I didn’t think it would turn out to be perfect like this. Whenever I see this mosque, I remember what a great religion Islam is. I understand the importance of your movement better lately after seeing how all those terrorist attacks conducted in the name of Islam damage the image of the religion. [Terrorist organizations such as] Boko Haram, al-Qaeda and [the Islamic State in Iraq and the Levant] ISIL cause the religion of Islam to be misunderstood.”

Expressing confidence in the Turkish volunteers of the Gülen movement, Zuma added: “You are regarded as South Africans now. I have huge confidence in you. We are ready to do our best so that you can open more schools and other voluntary institutions [in Africa].”

Zuma asked Turkish volunteers to help improve the quality of a school where she and a number of South African presidents and ministers were educated, stating that the volunteers are very successful in the field of education. According to a recent cooperation contract signed between Turkish charity Kimse Yok Mu and the AU, a total of 1,000 schools will be built across Africa by the charity organization.

Before leaving the mosque complex, Zuma said she had enjoyed the visit. “This will not be my last visit. I’ll come here again together with my family. I would like to invite you to Ethiopia [the headquarters of the AU]. I would like to host you as my special guests.”

In addition to his admirers, Gülen has enemies who have obliged him to live in the United States far away from his beloved country since 1999. It is clear that the animosity towards Gülen stems from Kemalist hard-line secularism, which sees in any manifestation of Islam the worst enemy of modernization and wants to exclude religion from all spheres of society.

Fethullah Gülen stated a few days ago that he made a mistake by supporting the Justice and Development Party (AKP) during the 2010 referendum campaign. Even though, as of today, I do not think that supporting the constitutional amendment package was wrong in itself, it seems that this package has paved the way for the AKP’s growing semi-despotism.