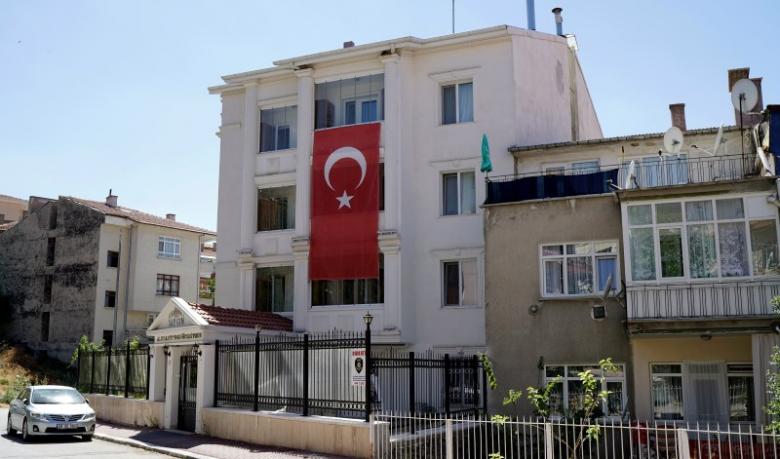 A Turkey's national flag hangs on the facade of a girls dormitory which was sealed by Turkish authorities over alleged links to the followers of U.S. based cleric Fethullah Gulen, who Turkey accused of staging a coup attempt in July, in Ankara, Turkey, August 16, 2016. REUTERS/Umit Bektas

Authorities have closed 15 universities and around 1,000 secondary schools linked to Fethullah Gulen, the U.S.-based Muslim cleric blamed for the July 15 attempted putsch. Gulen has denied involvement in the plot and condemned it.

The closures have left about 200,000 students in Turkey in academic limbo, wondering if they can continue their studies and worried about the black mark of a Gulen school on their college record. Tens of thousands of academics and school teachers have also been purged, deepening concern about curtailment of academic freedom and free speech.

“As students at universities that have been shut, we are being victimised, even though those schools were opened with state approval,” said Tekiner.

The 23-year-old had been due to start her fourth and final year at Mevlana University in the central city of Konya before the coup. “I have doubts if I will be able to finish my studies,” she said.

Tekiner said she and others were harassed on social media, labelled by anonymous accusers as supporters of the coup because they attended Gulen schools.

President Tayyip Erdogan and the government say the cleric’s network used the schools to recruit followers who then infiltrated the military, civil service and judiciary. Gulen, who has lived in Pennsylvania since 1999, denies the charges.

Turkey has asked the United States to extradite him but Washington says only a federal court can make that decision. Since the coup, in which at least 240 people died, Turkey has detained about 40,000 people and formally arrested half of them.

Rights groups and some in the West fear Erdogan is using the purges to stifle dissent and tighten his grip on power.

Until a public falling-out in 2013, Erdogan and Gulen were allies. Erdogan initially saw the cleric as useful in taming the influence of the military and secular elite who had dominated Turkey since the founding of the modern republic.

For years Gulen’s followers have run schools across Turkey and as far afield as Africa and the United States, blending Islam with an emphasis on science and interfaith dialogue.

The schools helped to open up higher education to Erdogan’s voter base – the pious masses often from poorer regions who were traditionally shut out of elite universities in Istanbul and Ankara.

Erdogan, himself a graduate of a religious school, has fought to bring religious education into the mainstream of constitutionally secular Turkey and worked to overturn a ban on the headscarf in parliament and universities.

But the closure of Gulen schools is troubling for students in towns where there are no other universities. Those from modest backgrounds – and female students from pious families – cannot afford, or may not be allowed, to live away from home.

“The reason I chose my university is to be close to home,” said another student from Konya’s Mevlana University. “As a girl, my family would never allow me to study in another town.”

The Council of Higher Education, known as “YOK” in Turkish, provoked widespread outrage when it said students would be placed at new universities based on exam scores, meaning they could end up at a school on the other side of the country.

It later relented following a number social media campaigns, including one under the hashtag “#YOKbizimagduretme” or “YOK, don’t victimise us”.

Roughly 80,000 people in the military, civil service, and judiciary have been sacked or suspended in the purges. Around half of those have been in education, according to state media.

Teachers’ unions and some opposition politicians say authorities are targeting educators based on evidence that is tenuous at best – such as having opened a savings account at Bank Asya, a now defunct lender founded by Gulen’s followers.

The government has said the investigations and other measures are necessary to prevent another coup.

But Kamuran Karaca, who heads one of Turkey’s biggest teachers’ unions, said the wrong people were being targeted. Since the coup, 88 members of his Egitim-Sen union have been suspended.

“All of our members who have been suspended, rather than being supporters of Gulen, are on the contrary people who strive for secular education and a secular life,” said Karaca.

Gaye Usluer, a lawmaker from the opposition Republican People’s Party, criticised what she said was a “sweeping” crackdown that has also harmed people who may be innocent.

Candan Badem, a Marxist historian, was briefly detained for possessing a book by Gulen in his home, his lawyer told Reuters. He was later released. Badem signed an “Academics for Peace” petition this year that criticised military action in the largely Kurdish southeast.

Erdogan denounced the more than 1,000 signatories, which also included U.S. linguist and activist Noam Chomsky, and some Turkish academics were detained over it.

Several academics and teachers declined to talk to Reuters about the purge, saying they were afraid to go on the record.

“The freedom to communicate and the freedom to collaborate are essential to functioning good science,” said Rush Holt of the American Association for the Advancement of Science, who wrote an open letter to Erdogan urging protection of the rights of the scientific community.

The European University Association has said that measures introduced in the wake of coup “go in the wrong direction”.

Still, some academics defend the crackdown.

“Nobody knows where this illegal organisation starts and where it ends,” said Sedat Gumus, an associate professor at Necmettin Erbakan University in central Konya.

“In such a context, suspending many people from their jobs is understandable. In the investigation it will be revealed who was involved to what extent. If there are people who are falsely accused, they should be able to return to their jobs.”