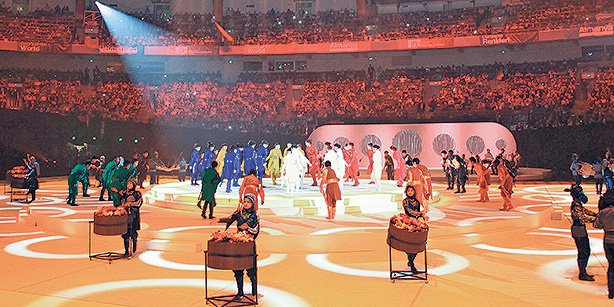 “We hope that the light of love and tolerance spreads all over the world from this scene to illuminate the horizon, particularly that of Turkey,” the IFLC coordinator, Halil Ursavaş, said during the final celebration in Dortmund on Saturday.

Addressing the 2,500 students that joined the olympiads from nearly 150 countries, Ursavaş hailed the participants “language of love” and sent his gratitude to the German authorities for welcoming the international students of the olympiads.

The IFLC — a new model of what was traditionally known as the Turkish Language Olympiads — has already been held in capital cities around the world for two years since President Recep Tayyip Erdoğan banned them in Turkey after a corruption investigation implicating members of the government went public on Dec. 17, 2013.

The graft investigation that put Erdoğan and his inner circle in jeopardy was assessed by Erdoğan as an effort to topple his government initiated by the Gülen movement, also known as the Hizmet movement. Since then, instead of helping the police and judiciary elucidate the case, Erdoğan has chosen to target anyone associated with the movement. This includes Turkish schools overseas that have been educating young people from different countries to recite poems and sing songs in Turkish under the umbrella of the Turkish Language Olympiads.

“What they have as olympiads are over for us,” Erdoğan was quoted as saying in mid-March of 2014.

Germany has already been hosting the finals of the Turkish Olympiads for two years — held in Dortmund this year and Düsseldorf last year.

Greeting the participants in different languages, the minister of innovation, science and research from North Rhine-Westphalia, Svenja Schulze, praised the organization, saying the olympiads are making a great contribution to living together in harmony. Emphasizing the importance of coming together and understanding each other to world peace, Schulze said, “I want to call on everyone here to use this opportunity.”

“There is no place for racism or Islamophobia in this society and to share your experiences, you could not find a better place than Germany,” Michelle Müntefering said.

Addressing participants from Turkey, she noted that the developments in Turkey are followed in Germany and called for Turks to take responsibility and think about whom they want to give the authority in the country.

“Different cultures and languages meet with you here as brothers. You are developing mutual understanding. I wholeheartedly thank each of you,” Scharrenbach said, delivering her gratitude to the organizers of the event.

The IFLC, which has been bringing together students from nearly 500 private Turkish schools across the world to share their experiences and thus create a peaceful network around the globe, also received a message from Islamic scholar Fethullan Gülen, who is the main founder of the network.

In his message, Gülen said; “You are coming up as a moon and becoming a source of hope at a time when people are planting seeds of hostility in [people’s] hearts, and governments, instead of providing public confidence and freedom, are inflicting cruelty. All of you are inviting all of humanity to live in love and friendship. As love blossoms you all deserve admiration.” Gülen also extended his sincere gratitude to the German authority for hosting the event.

Aidana Zhumakova from Kyrgyzystan explained that before coming to Germany she did not expect that she would find young people of the same mindset here. “It is so nice to make friends from different countries who also aim to establish a different world full of beauty,” 16-year-old Zhumakova said, adding that the Turkish language is what unites them. “If not for Turkish, these children wouldn’t be here.”

Calling their experience “very good,” 14-year-old Rupa Yashaswi from India said that thanks to Turkish, a common language for them, they have no communication problem, which helps her make friends from different cultures. “This language makes us close.” She sang part of the song “A New World,” that ended the festival with all of the participants onstage, generating an exhilarated atmosphere and resulting in a standing ovation.