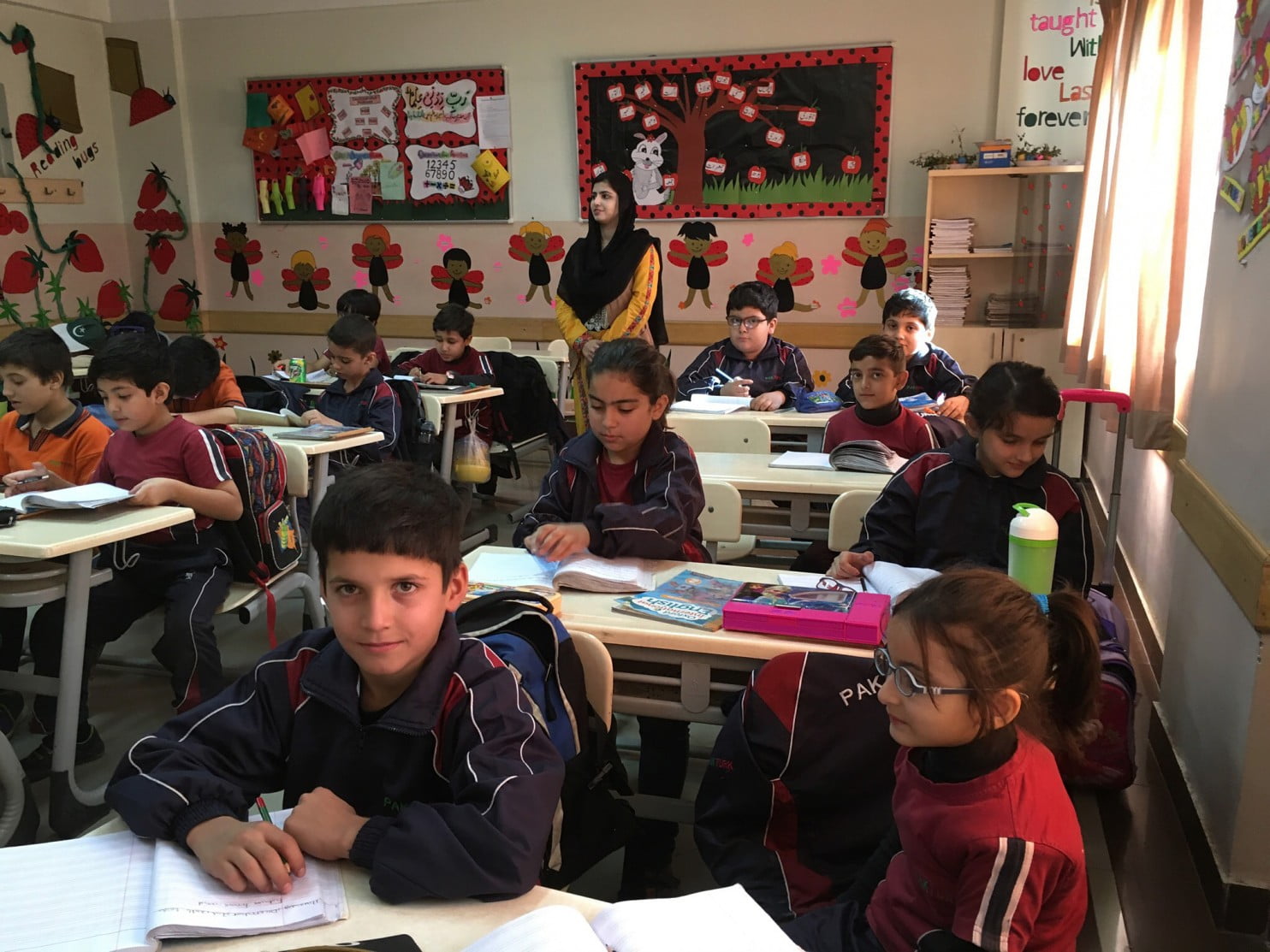 A second-grade English class at the PakTurk International School in Peshawar, Pakistan, is temporarily being taught by Pakistani teachers because the regular Turkish teachers are being told to leave the country. (Pam Constable/The Washington Post)

PESHAWAR, Pakistan — In a second-grade classroom, decorated with colorful posters of letters, numbers and animals, students were reciting English sentences using the future tense. Down the hall, kindergartners were enjoying a lunchtime party with cupcakes and funny hats.

But something was missing from this picture of studious nurturing. In many classes at the Pak-Turk International School last week, the regular teachers from Turkey were absent. They had been banned from the premises after the Pakistani government abruptly announced on Nov. 15 that they had five days to leave the country.

Since then, the expulsion orders against about 100 Turkish teachers and their families have been challenged in provincial courts, and most have been granted temporary visa extensions. But despite criticism from international rights groups and Pakistani educators, all expect to be forced to leave, and some said they fear being harassed and arrested if they return to Turkey.

“We are really sad about our teachers. They give us parties. They give us love. We don’t want them to go,” said Marosh Zishan, 8, whose English class was being taught by a substitute Pakistani teacher.

Asked what the second-graders had learned from their Turkish teachers, Malisha Shaheed, 7, stood up eagerly. “Not to fight,” she said.

The teachers at Pak-Turk International in Peshawar, and at 27 other such schools with 11,000 students across Pakistan, have not been accused of doing anything wrong. The private schools, established in the 1990s by Turkey’s Gulenist movement, are rated among the best in Pakistan. They meet British university exam standards, and many Pakistani professionals send their children there.

But this summer, the teachers were caught up in an international controversy, stemming from a failed military coup in Turkey in July. After the uprising was quelled, Turkish President Recep Tayyip Erdogan unleashed a crackdown in which thousands of academics, lawyers and political activists were arrested.

Erdogan also singled out the Gulenists as having influenced the army to rebel and denounced their leader,  Fethullah Gulen, as a mastermind of the revolt. Gulen, 77, a Turkish Muslim cleric, has lived in exile in Pennsylvania for 17 years. He condemned the uprising, writing in the New York Times that his philosophy is “antithetical to armed rebellion.”

Still, Gulen loyalists had worked for years to infiltrate Turkish institutions, according to analysts in Turkey. Many in the police and judiciary used their positions to target military and political leaders, including Erdogan allies.

Erdogan’s international stature has plummeted since the crackdown, but he remains a valued ally of Pakistan. In mid-November he was welcomed here for a high-profile visit. He addressed a session of Parliament, where he denounced the Gulenists as a “bloody terrorist group” and warned that they could also endanger Pakistan. Before arriving he requested that the teachers be expelled, and Pakistani Prime Minister Nawaz Sharif complied.

The Pak-Turk schools are part of Gulen’s Hizmet program, which has educational and social welfare projects in numerous countries. Gulen’s teachings have a strong Islamic component, but Hizmet publications and members describe it as a “civil society movement” that promotes “human values” including empathy, mutual respect and community service.

“We were so happy here,” she said. “My kids learned Urdu. Then suddenly they told us we were going to be deported in three days. What have we done? If they say we are terrorists, where is the proof?” she demanded. “My parents are telling me it’s too dangerous for us to come back, but we have no choice. We are open targets now.”

Many Pakistani parents of Pak-Turk students have vocally protested the government’s move, participating in demonstrations in various cities over the past several weeks. They insist that the schools do not promote any radical religious ideas, and they praise the Turkish influence as building moral character in the young.

“My children have been going here for four years, and I have never heard anything about the Gulenists,” said Mohammed Zubair, a medical doctor and hospital official in Peshawar who said he chose Pak-Turk over several other highly ranked private schools. “They teach ethical values and build good citizens. This is completely unfair.”

The Pakistani government has not fully explained its action, but government lawyers have described it as a “foreign policy matter” and noted that Pakistan has the right to not renew foreign visas. Officials have also suggested that little harm is being done to the students, since the schools will remain open.

Critical analysts, however, said it was strictly a move to please Erdogan, who is close to Sharif and supports Pakistan in its rivalry with India. Pakistan has been isolated abroad because of accusations that it harbors Islamic terrorists, and Turkey has remained one of its few staunch friends.

Amnesty International condemned the expulsion order, saying Pakistan “needs more classrooms and more teachers, not a politically motivated decision to purge educators at the behest of the Turkish government.” Pakistan’s public school system is poorly funded and equipped, and millions of children work instead.

Babar Sattar, a lawyer and commentator in Islamabad, observed that “asking all Turkish teachers in an excellent school [chain] to exit the country at the drop of a hat, in the middle of the academic term, is an insult to the Turkish teachers and a disservice to their Pakistani students. Why couldn’t our prime minister tell Erdogan that this wasn’t the right thing to do?”

The PakTurk Educational Foundation immediately challenged the expulsion order in Pakistani courts, which have responded in various ways. The Islamabad High Court said the group should petition the Interior Ministry for visa extensions but noted that allowing foreigners to remain is “the sole prerogative of any state.” The Peshawar High Court issued a temporary injunction on the expulsions in November and later extended it until Dec. 13.

Meanwhile, the teachers remain in limbo, suddenly jobless in Pakistan and fearful of what awaits them in Turkey. One faculty couple with two children, who asked not to be identified for fear of reprisal, said they now rarely leave the rented house they share with another Turkish family.

“If people at home know I work here, it will be enough to send me straight to jail,” said the husband, 30, who has taught math in PakTurk schools for the past several years. “We have started to sell all our furniture. We don’t know where else we can go and what will happen to us in Turkey,” he said.

His wife, a science teacher, started to cry, then spoke angrily.

“We were so happy here,” she said. “My kids learned Urdu. Then suddenly they told us we were going to be deported in three days. What have we done? If they say we are terrorists, where is the proof?” she demanded. “My parents are telling me it’s too dangerous for us to come back, but we have no choice. We are open targets now.”

Erin Cunningham in Istanbul contributed to this story.