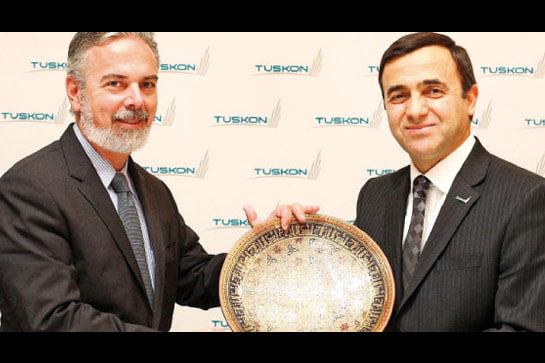 Turkish Confederation of Businessmen and Industrialists (TUSKON) President Rızanur Meral on Thursday called on investors from Brazil to enhance cooperation with their Turkish counterparts in tourism projects.

Meral met Brazilian Foreign Minister Antonio Patriota in a meeting in İstanbul on Thursday where commercial ties between the two countries were discussed. A total of 30 TUSKON member investors participated in the meeting.

Noting that Brazil was set to host the 2014 World Cup and the 2016 Summer Olympics, Meral stated that: “Such organizations will contribute to the tourism industry [in Brazil]. Based on this, Turkish companies should cooperate with their Brazilian partners.” He further asked Brazilian companies to collaborate in the aeronautical, defense, oil and renewable energy industries in Turkey.

Meral highlighted Brazil’s fast-growing economy, stating that the country ranked sixth in the world with its natural resources and strong local industries. “The $3 billion trade volume between Turkey and Brazil is below the desired level considering the capacities of the two countries,” Meral further added, stating that their aim was to increase the figure.

Noting that Brazil served as a doorway to South American markets, Meral called on Brazilian investors to benefit from Turkey’s role as bridge to the African, Middle Eastern, Central Asian and regional markets.

“As industrialists and tradesmen, we attach great importance to Brazil. Five investment committees have visited Brazil to date while Turkey hosted eight committees from Brazil,” Meral further said as he mentioned Turkey’s efforts to improve commercial ties with Brazil.

Patriota, confirming the improvement in relations between Turkey and Brazil, highlighted the similarities between the two countries. “Both countries have seen a drop in their poverty rates and have focused more on investment in Africa,” he said. Patriota went on to add that the manufacturing industries of both countries are strong.

Patriota noted that the average national income of Brazil was approximately $12,000 a year which was similar to Turkey’s. The minister also said that 40 million people, who were initially categorized as low-income, are now in the middle-income bracket. Brazil aims to add 16 million more to the middle-income bracket, for which the country needs the cooperation of Turkey in the fields of investment.

Patriota also offered to share Brazil’s experience in the organization of such events as the Olympics and the World Cup as Turkey aims to host such events.

TUSKON, Confederation of Businessmen and Industrialists of Turkey, opens new trade doors with Turkish-Filipino Business Forum in the capital Manila. A delegation of TUSKON businesspeople organized a business trip to the Philippines on January 26-30. As a part of their agenda, the delegation met with the Vice President of Philippines Jejomar Binay at the presidential […]