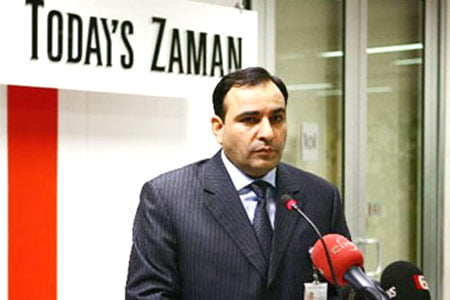 ABANT — Turkey has long been trying to rid itself of the remnants of the Constitution of 1982, which was the product of the military coup of September 12, 1980, as it goes through a process of confronting and settling accounts with military tutelage and coups.

Almost all political parties had promised to make a new constitution or emphatically referred to it during the rallies they held in the run up to the general elections of June 12, 2011, and the general public still holds great expectations about having a new, civilian, democratic, pluralistic, individual-centered, liberal constitution. The reason why I say “still” is that politicians tend to refer to the need for a new constitution only before elections, but forget about it after the elections. I personally, at least, do not remember the last time Prime Minister Recep Tayyip Erdoğan, who is the country’s main agenda-setter, touched on the issue of making a new constitution.

Nevertheless, the enthusiasm-imbued matter of drafting a new constitution has not dropped from the agenda. The parliamentary Constitutional Reconciliation Commission, led by Parliamentary Speaker Cemil Çiçek and consisting of equal numbers of representatives from the four parliamentary parties, has been working unremittingly since October 19, 2011. It has been accepting for review demands and expectations from the general public, civil society, experts and pressure groups about how the new constitution should be. The commission has adopted a four-stage plan for its work. Accordingly, there will be a participation process until April 30 during which demands for the new constitution will be heard, a process whereby the main framework of the constitution will be created under the close scrutiny of the public starting May 1, an assessment process during which the resultant text will be discussed with the public and, finally, a voting process.

In addition to the commission’s work, civil society organizations (CSOs), too, have been organizing activities and events concerning the new constitution-making process and preparing framework reports and lists of their demands or complete drafts of the constitution. One of these CSOs is the Journalists and Writers Foundation’s (GYV) Abant Platform, which has been making an impression on Turkey’s intellectual arena for about 20 years. Having held its second meeting on the new constitution-making in a year, the 26th meeting of the Abant Platform, under the title the “Framework of the New Constitution,” managed to bring together representatives of almost every belief, ethnic, political and philosophical group or formation in Turkey in Bolu’s pleasant town of Abant. For three days, starting on Friday, the participants discussed at length what their social groups expect from the new constitution.

At this last Abant meeting, I witnessed the consoling fact that even the most controversial and tension-prone issues of the recent past were discussed freely and peacefully. All these matters that would have been considered taboo in the past could be discussed far and wide, with no strings attached, by intellectuals from all walks of life. More importantly, this meeting proved that it is possible to arrive at a consensus even with respect to as controversial matters as citizenship and identity, the Kurdish issue, education in one’s mother tongue, the structure of the state, the Religious Affairs Directorate and the presidency. The Abant Platform was proof that conciliation, not conflict, will emerge if everyone is allowed to speak their mind freely, without any restrictions. We saw that Turks do not raise objections to a constitution that would endow Kurds with their due rights and freedoms and, likewise, the Muslim majority is ready to accept a constitution that would allow non-Muslim religious minorities to enjoy their rights as first class citizens of this country and that would make the Treaty of Lausanne redundant and meaningless in terms of securing the rights of non-Muslim religious minorities and that would even make us forget the denomination “non-Muslim religious minorities.”

Having been able to secure a 95-percent representation rate in the last elections, Parliament does not have an obstacle make or offer an excuse for not making a new constitution that would meet the general public’s demands for rights and freedoms and that would catapult Turkey into the future. Turkey does not have the luxury of missing this historic chance to jettison the current patronizing, fear-instilling and uninspired Constitution that bears the mark and spirit of a military coup. Parliamentary Speaker Çiçek’s argument that it is not enough for four parliamentary parties to just lend support to the constitution-drafting process, as they must throw all their weight behind it, should be underlined. Indeed, as he noted, if this chance is missed, the vicious debates and disputes of the last 30 years will continue to waste our time and energy for another 30 years.

What I gather from the Abant Platform’s discussions on the new constitution is that the biggest risk facing the new constitution Turkey so needs the sacrifice of these efforts to the debate over choosing between a presidential and a parliamentary system. What Turkey needs is not to transition to a presidential system, which is alien to its political culture, but to perfect its democracy. Instead of discarding the parliamentary system, which was never fully implemented in the country because of military tutelage, coups and interventions, Turkey should tackle all the problems it has encountered in its 150 years of experience and transition to a full-fledged parliamentary system. No references or reactions to past existing and constitutions should be made, and Turkey and Turkish society’s needs and expectations should be analyzed in depth and a constitution should be made from scratch with a focus on individuals and their rights. If this can be done, it will help Turkish democracy take a great step further.

I must note here that another danger would be our failure to ward off the mentality that is embodied in the current Constitution, as well as our fears and worries that tend to imprison us. This process must never be allowed to yield to that depressing mood, which is visible in such clichés as the status quo’s favorite: “Turkey’s special conditions.” Moreover, another morbid threat is the tendency to advertize the Constitution, which performs very poorly with respect to universal human rights, individual freedoms and contemporary democratic criteria. Doing so propagates a mentality that “this is certainly good for the citizens of Turkey,” and we must be wary of this illness.

Although he delivered a speech with which I can readily agree to the highest point at the Abant meeting, Çiçek previously said, “We will draft a constitution not for the EU, but for our citizens,” which does not seem to me a hopeful promise in the light of our tragic experiences of what was done in the past “for our citizens.” Here, I, as a citizen of the Turkish Republic, would like to call on Mr. Çiçek and say: “Please do not make a constitution for the sake of me or what you think I want, but make one that relies on the EU’s values of democracy, freedoms, rights and superiority of law. Please note that I don’t want a constitution that you think I deserve, but that I am yearning for a constitution in line with EU standards that would help to make Turkey a contemporary democracy. It would be a great step if the pluralistic spirit shown in picturesque Abant would be allowed to pave the way in shaping the new constitution.