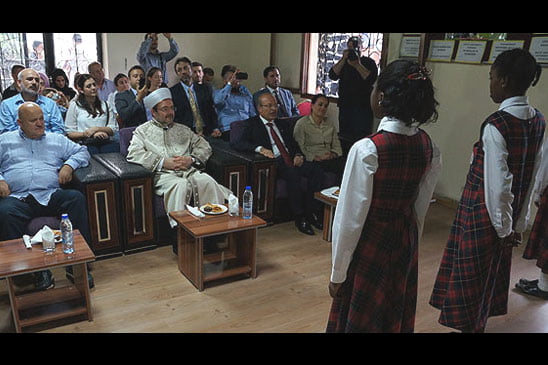 Religious Affairs Directorate President Mehmet Görmez visited a Turkish Schoolin the Cameroonian capital of Yaounde on Monday, where he praised the contribution of Turkish schools in Africa. Görmez, accompanied by Turkish Airlines Chairman Hamdi Topçu, was welcomed at the Amity International Turkish School with a ceremony by students and school administrators. The visitors listened to poems and folk songs performed by students from the school.

Speaking during the visit, Görmez said : “Africa is a continent where humanity’s greatest sins have been committed: enslavement, colonization and massacres… Not only people but also languages have been massacred here on this continent,” Görmez stated, adding that the education of the students in these Turkish schools will “atone for the sins committed in Africa.”

Görmez said one of the biggest demands of Muslims in Cameroon is the construction of an imam-hatip school, adding that the Turkish Directorate of Religious Affairs will do its best to ensure the establishment of such a school in the country.

The Muslim cleric also noted that Turkey did not have any relations with the Muslims of Africa until five or six years ago but that this situation has begun to improve recently.