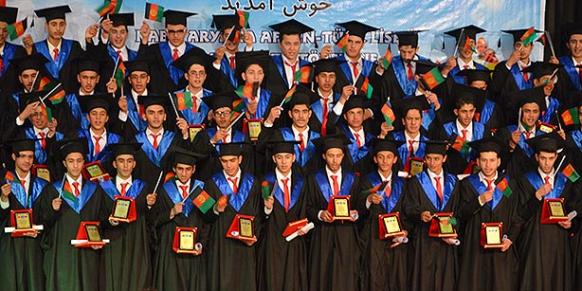 Hundreds of students have been graduated from the Turkish schools in Afghanistan since 1995.(Photo: Cihan)

“I am very happy today. Bearing the huge amount of uneasiness and unrest in the country in mind, new generations are [being] brought up in your schools to save the country from these crises. Today we all are happy. The seeds planted are becoming flowers and our people will definitely see the fruits of this in the future,” Afghan Education Minister Asif Nang said at the graduation ceremony of the Afghan-Turkish school in Kabul on Monday. He also noted that the graduates of the Afghan-Turkish schools are the generation that will help Afghanistan recover and will secure its future.

Nang greeted the graduates of the school and their parents, and spoke to an audience that also included Afghan-Turkish Çağ Education İnstitutes (ATCE) head Numan Erdoğan, a group of Afghan parliamentarians, politicians and opinion leaders. Starting with the national anthems of both countries, the graduation ceremony later also included poems recited by the graduates.

Minister Nang especially underlined the government’s full support for the spread of Afghan-Turkish schools across the country. He asked Turkish entrepreneurs to think about locations where there are currently no schools and said that the government will help build schools in those provinces.
“Starting with a single school, the Afghan-Turkish schools now number 23 and we wish to make a contribution to the schools as well. [The Afghan government] is planning to support the construction of school buildings in the provinces that lack schools so that we can make our contribution to opening more Turkish schools,” Nang said.

Mentioning the social and extracurricular activities in the schools Müşahit continued by saying: “All these activities are increasing the students’ self confidence. Even the most naughty child is becoming disciplined, respectful and obedient at these schools. ”

In his speech, Erdoğan said the Afghan-Turkish schools, which have been in operation in Afghanistan since 1995, produced 606 graduates across the country in 2014. The total number of graduates since they established a presence in the country has exceeded 5,000. The university admission rate of the graduates is 99 percent, Erdoğan said, and he also mentioned that 30 percent of their graduates are now involved in education activities in at least 42 countries of the world.

There are now Afghan-Turkish schools in six towns in Afghanistan, and comprise 23 schools including preschools, elementary schools, high schools, imam-hatip schools, college preparatory schools and the Anadolu Language-Culture Center. Nearly 7,000 students have been educated at these institutes, and a total of 198 Turkish and 350 Afghan instructors are working at these Turkish schools.