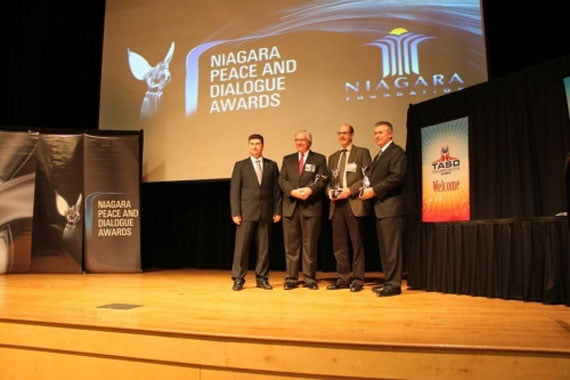 Serkan Aykan, Niagara Foundation Ohio director, delivered the opening address of the 3 hour-night. Referring to the foundations aim as to bring together people of diverse faiths and walks of life, Aykan said they set out for a goal that exalts high human values regardless of faith, language or nation. Next, the attendees were invited to watch a promo video featuring an overview of the foundation’s activities.

This year’s awards were given in three categories. Community Service Award honoree was NBC4. The company Greif received Peace Award while Columbus College of Art and Design was honored with Global Vision Award. President and CEO of Greif, David Fischer, gave his remarks in which he said he’d been to Turkey and it’s the country he liked best. Dennison Griffith received Global Vision Award on behalf of Columbus College of Art. As the night drew to the end, the well-known businessman Yaromir Steiner offered the closing remarks. “Fethullah Gulen is a great man of service. I admire his efforts for education and dialogue. He needs to be well understood,” Steiner noted.

Three Turkish cabinet ministers resigned Wednesday in an intensifying corruption scandal that has challenged the government of Prime Minister Recep Tayyip Erdogan and polarized the country.