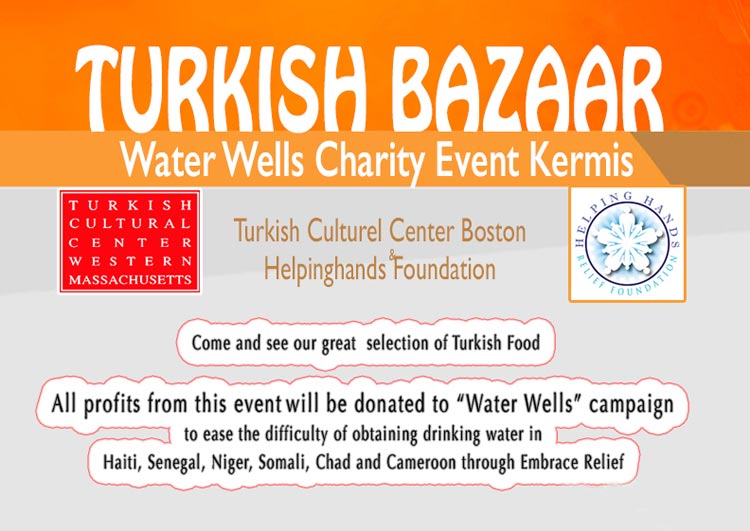 The Turkish community of the Springfield area will host two events to educate and help people.

The first event is a Turkish Bazaar, which will take place on Saturday, May 16, from 10:30 a.m. to 8 p.m. at the Turkish Cultural Center of Western Massachusetts, 540 Meadow Street Extension, Agawam. All profits from this event will be distributed to the “Raise an Orphan” in Haiti charity in conjunction with Embrace Relief, non-profit organization that brings together teams of volunteers to collaborate on humanitarian aid and disaster relief efforts.

At the bazaar there will be a selection of food, gifts and household items for sale, mostly home- and handmade by the Turkish community members.

Foods will include both beef and chicken “doner” sandwiches (the meat is specially marinated); “sarma,” rice wrapped in grape leaves, usually served on special occasions; and “borek,” a pastry filled with feta cheese or ground beef.

The bazaar will provide “a glimpse of Turkey,” said Ahmet Gunay, a member of the Turkish Cultural Center of Western Massachusetts.

The second event is the third International Ahiska Conference, which this year will focus on “Unlocking the Treasure within Us: Integrating our Strength Together for a Better Future.” It will take place Sunday, May 24, from 10 a.m. to 3 p.m. at Western New England University‘s Rivers Memorial Hall in Springfield.

The conference aims to raise awareness about Ahiska Turks, an ethnic minority group that was forced to flee violent pogroms in 1989 in Uzbekistan; they were exiled from Russia several years ago “where they had a ton of troubles,” Gunay said.

Many were resettled in the United States and live throughout the country. The conference is the third national gathering at which Ahiska Turks can remember their history and support one another, Gunay said.

This will be the first such conference in Western Massachusetts; previous ones were in Dayton, Ohio, and St. Louis.

Both events are organized and sponsored by the Turkish Cultural Center of Western Massachusetts.