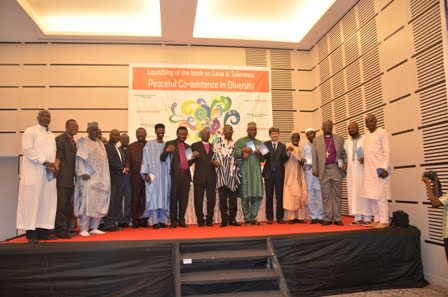 The conference stressed that peaceful co-existence is possible only when people learn to accept, embrace and respect one another in spite of their religious and racial differences.

Last year on April 30th, Accra hosted an international conference on the theme: Love and Tolerance: Peaceful Co-existence in Diversity’, which attracted reputable local and international scholars with diverse background.

Organized by the Ghana-Turkey Co-operation and Development Association (TUDEC), the Great Volta Foundation Dialogue Centre and the Fountain Magazine, in collaboration with the National Peace Council.

The conference stressed that peaceful co-existence is possible only when people learn to accept, embrace and respect one another in spite of their religious and racial differences.

The key objective of the conference was to create a platform for discussion among local and international participants, pointing out the necessity for the promotion of personal and social dialogue, as well as interfaith and inter-ethnic dialogue for mutual understanding. It also sought to encourage participants to see dialogue as the first option in any dispute and the urgent need to strive to understand the concept and relevance of love and tolerance.

The atmosphere at the conference hall at the end of the event was one filled with the spirit of love, friendship and belongingness as people went about talking, greeting one another and exchanging pleasantries all in the name of peace. At the end of the program participants and invited guests talked about how important the conference was and requested for a copy of the presentations that were given by the various speakers.

As a result of this demand, TUDEC in collaboration with the National Peace Council came out with a book containing a comprehensive version of all the speeches that were delivered during the conference in April. The book was launched on Tuesday 22nd March, 2016 at the Labardi Beach Hotel.

The occasion was graced with the presence of Hon. Rashid Pelpuo, Minister of State designate for Public Private Partnership (PPP), the Chairman for National Peace Council Most. Rev. Prof. Emmanuel Asante, Major General OB AKWA-commandant of the Kofi Annan Peace Training Center and a host of other dignitaries.

The chairman for the occasion, Maj.Gen. Obed Boamah Akwa in his speech congratulated the eminent Prof. Emmanuel Asante for editing such an important book, which is a veritable compendium of precepts and principles coming from a wide range of equally eminent personalities. He mentioned the role Most Rev Prof.Asante plays in in Ghana’s governance structure is well acclaimed and is yet another feather in his cap.

He further mentioned that with barely 199 days away from national elections, issues that are uppermost in the minds of all well-meaning Ghanaians, and indeed the international community, is that we go through our elections peacefully and thereby maintain our enviable track record. He is of the opinion that the book being launched has an important contribution to make towards this desirable goal, if only people will acquire, read, assimilate and apply its abiding precepts.

He concluded by saying that the greatest contribution we can all make towards the peace and development of our beloved country, and for global peace, is to own a copy of the book.

The spokesperson for the National Chief Imam, Sheikh Armiyawo thanked the organizers for the special invitation to give his remarks on the conference. He emphasized that we should always make sure that whatever happens in matters of dialogue, we can still find a small space that brings us together. He talked about how God had created all of us differently as an expression of His own wisdom.

Mr. Yusuf Temizkan, President of TUDEC emphasized how important it is that institutions, organizations, scholars and clerics must be given the platform to talk about issues pertaining to love, tolerance and peace whenever they can so such messages can prevail in the heart of every man in order for us to have a peaceful world that we can all cherish and be proud of.

He talked about how the team decided to recreate the presentations delivered at the conference last year in such a manner that people from all walks of life could have something to hold on to; a little book that would last for years so that even their grandchildren and for some of them, their great grandchildren would also have the opportunity to read and learn a thing or two from. He thanked everyone present for having made time out of their busy schedules to take part in the book launch.

Most Rev. Prof. Emmanuel Asante in his review of the book said it contains a collection of various addresses that were presented by clergy and that it involved nine main addresses.

The first touches on the fact God created us so that we will know each other and live in peace. The second touches on the need for people of diverse religious persuasions to tolerate one another and commit to the project of peace.

Third stresses on the fact that tolerance and love is crucial for societal and community living, whereas the fourth talked about the liberative power of education as propounded by the Hizmet movement.

All the other addresses dwelled on education, Tolerance and love. He stated that the ideas that are expressed in the book are bigger than the size of the book itself.

All the speakers emphasized that love, tolerance, dialogue and education are key to peaceful co-existence. They stressed the need for peace actors to ensure the sustenance of peace in society and called on religious leaders to create platforms from which grievances emanating from religious disagreement could be settled.

Chief Advisor of Prime Minister of Turkey: The Gülen Movement supports not the Ak Party but the right projects. The claim that they’re becoming political is an unfair judgement.