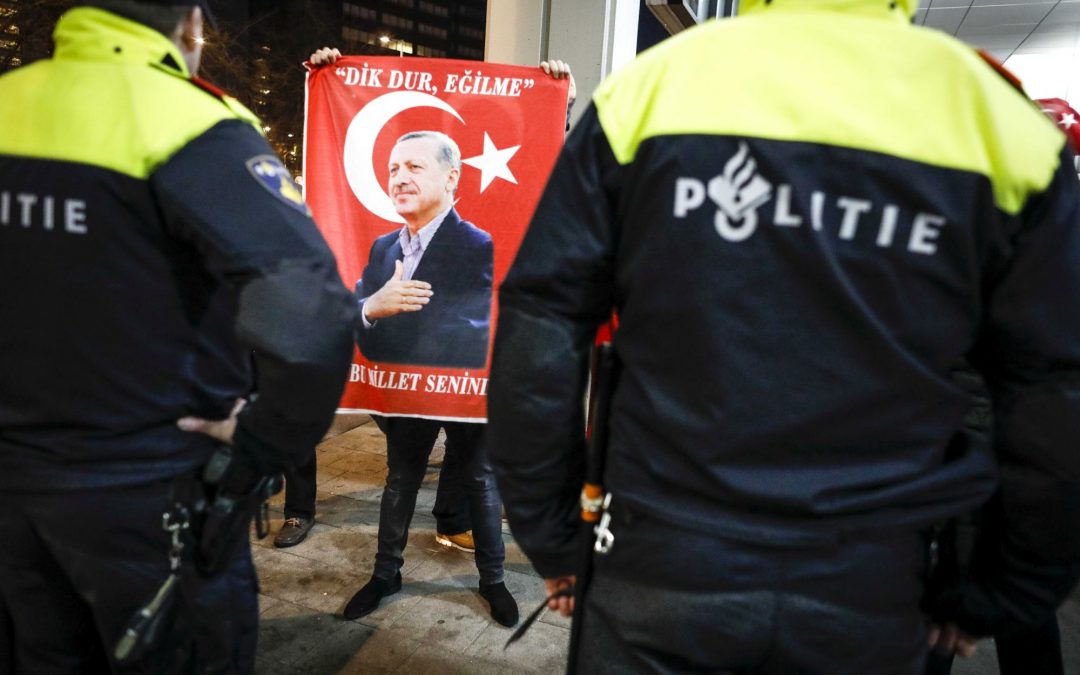 O.E., a 19-year-old supporter of the Justice and Development Party (AKP), who threatened to kill M. D. (32), a sympathizer of the Gülen movement who live in the Netherlands’ Tilburg city was sentenced by a Dutch court.

O.E. had been fined by the Breda court for sending threatening and insulting messages to the educator M.D. and the appeal court of S-Hertogenbosch has approved the sentence on December 6, 2017.O.E. was sentenced to 60 hours of park and street cleaning. If O.E. commits the same crime within 2 years, he will be given extra 30 hours penalty and 250 euro fine.

M.D.  commented, “Although the fine is a bit less I am very pleased to live in a country where the law is manifested.”

Previously, the Haarlem court in the Netherlands had sentenced those who called the administration of the Zaandam De Roos school, which is affiliated with the Gülen movement, as “traitor” and the school as a “F..O School” or “terror school.” The court has decided fine them with 1,000 euros for each violation. Those who insist on such crimes would be fined up to 10,000 euros.

After a controversial military coup attempt on July 15, 2016 in Turkey, the witch hunt targeting the sympathizers of Gülen movement has also been spread abroad. One of the countries where this tension was felt the most was the Netherlands. A large number of AKP supporters living in the Netherlands. On the basis of Erdoğan’s hate speech they attempted an arson attack on the Turkish educational institutions affiliated with the Gülen movement and threw stones. In addition, actual and verbal attacks also started to the people known as Gülen’s sympathizers.

Educator M.D., known for his close affiliation with the Gülen movement, was one of them. M.D., a theologian, voluntarily lectures young people at the Prisma Foundation, while at the same time organizing intercultural dialogue activities in the Netherlands. Just after the abusive harassment that started on the night of July 15, 2016 he went to the police on the next day and complained.

Erdoğanist fanatic O.E., who was born in Bergen Op Zoom in 1998, was constantly sending harassment messages to him. O.E. was arrested and sent to prison with the decision of the Breda court. After a while in prison, he was released at the end of 2016. With the decision of the appeal court, the sentence was finalized.

Someone was also referring to death by sending a photograph of a gun and a bullet in a message. M.D., who spoke to the Stockholm Center for Freedom (SCF) regarding the court decision and told his experience as follows:

“I work intermittently at the Prisma Foundation and the Spior Foundation. I teach religion in different schools every week. I am still studying Islamic religious teaching in Amsterdam. In Breda and Bergen op Zoom, I had weekly programs with dozens of young people. On the evening of July 15, 2016, a group of young people I know from Bergen op Zoom included me in a WhatsApp group. There were about 250 people in the group. From that group they sent me and the Prisma Foundation with unmentionable swearing and threats.

“Someone sent me gun pictures and sound recordings. They threatened to death. They insult me ​​and other sympathizers of the Gülen movement. I left the WhatsApp group right away and went to the police department in the morning and complained. Then I went on August 3, 2016 again to make a complaint for threats. I sent all the evidence as voice recordings, images, photos, everything through email. After a long time I asked if there was any progress. They reported that only one of the individuals was arrested and taken to court.”

The person mentioned here was O.E. Soon after evacuation, from January 2017 onwards O.E. allegedly embarked on a quest to find false witnesses in order to take revenge on M.D. Stating that he received this information from one of the same AKP youth group, M.D. said:

“I received a phone call from Bergen op Zoom on January 26, 2017. The person who was arrested and released, was trying to collect the evidence against me and looking for a false witness. He was trying to get the people say that I was collecting money in programs and deceiving them. When he could not find anyone to say that, he allegedly agreed with a few Moroccans. A couple of young people, who did not help him, warned me and told me that he was going to make me regret deeply for that he was fined in the court (schadevergoeding), he was so angry with me and he wanted to kick me to the curb.

“On the top of that, I reported this to the police as well. They kept a report. In the meantime, Slachtofferhulp Nederland (a social support institution) has helped me a lot. They constantly pursued and called me. I also got phone calls from the Schade-expert Openbaar Ministerie and they gave me a piece of advice. As a result, the appeals court confirmed this sentence.”

Saying that he can not go to Bergen op Zoom anymore M.D. said that “There are a lot of people warning me; ‘Do not come here, that is dangerous for you.’ They attacked two volunteers at the mosque there, but they did not want to announce it. And, at the door of the mosque belonging the Directorate of Religious Affairs of Turkey (Diyanet) in Breda, it was written that the sympathizers of Gülen movement were forbidden to enter.”

“Again in Breda another volunteer was threatened with ‘don’t wander around too much, your head could be cut off,’” said M.D and added that “As far as I know, boycotts were declared for two restaurants and two markets and many volunteers were threatened. Some of them complained and reported to the RADAR institution. But many of our friends did not complain by thinking that ‘police are not doing anything.’ RADAR, the institution that receives complaints of such hate crimes and sent them to relevant ministries, organized a program in Breda with the municipality. A student there by crying, told us what is being done to him at school.”

“A sympathizer of Gülen movement in Tilburg was kicked out of the mosque. The imam of the mosque in Breda posted some shares through Facebook to provoke the community. In the Netherlands we reject such discriminatory and racist attitudes. We do not want the matters of Turkey to spread here. We want to make the best contribution to the society we live in,” said M.D.

SCF has released a report on February 27, 2017 titled “Erdoğan’s Long Arm in Europe: The Case of the Netherlands” and exposed Turkish government profiling, harassment activities in Netherlands which led to physical assaults and arson attempts against Turkish President’s critics.