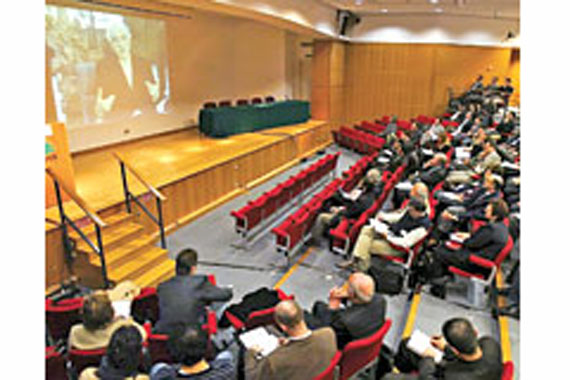 The conference titled about the Gülen Movement, inaugurated in the British House of Lords on Thursday, attracted hundreds of academicians and scholars.

On the second day of a conference titled “Muslim World in Transition: Contributions of the Gülen Movement,” inaugurated at the British House of Lords on Thursday, academics from around the world focused on Gülen’s ideas and the impact of the Gülen movement on the Islamic world.

In the morning session held Friday, titled “The Gülen Movement in Redefining Turkey and Anatolian Muslimness,” Marie-Elisabeth Maigre, a researcher at the London School of Economics who presented a paper titled “The Influence of the Gülen Movement in the Emergence of a Turkish Cultural Third Way,” said the Gülen movement had built a bridge between opposite poles in Turkey through its activities.

Maigre indicated that Gülen has undertaken a significant role as a “man of compromise and synthesis” to mediate between “local and global concepts” and the “Kemalists and Islamists.” Maigre also stressed that the Gülen movement attached great importance to the multicultural tissue of Turkey by backing freedom of faith and expression, democracy and Turkey’s EU bid. Urging the audience to question themselves by asking them whether the Gülen movement had an impact on the moderation of political Islam in Turkey, Maigre underlined that the greatest achievement of the movement has been to drag the Islamist movements and their supporters in Turkey to a moderate “third path.”

William Park, a lecturer in the Defense and War Studies Group at London University, who presented a paper titled “The Fethullah Gülen Movement as a Transnational Phenomenon,” argued that the Gülen movement had created a new supranational elite through its education and dialogue activities. Park stated that this elite group assumed important responsibility to have a positive impact on relations between states. He also contended that the movement reflected “Turkish values” more successfully than any other groups, saying, “The Gülen movement presents different aspects of Turkey to the whole world successfully.”

Professor Marcia Hermansen from Chicago’s Loyola University presented her extensive ethnographic study that she conducted over the symbols of the Gülen movement in a presentation titled “The Cultivation of Memory in the Gülen Community.” She pointed out that words relating to space and water were selected as names for the companies and institutions that are linked to the Gülen movement, stressing that words connoting inactivity such as a name of a lake were not selected, which she showed as the dynamic character of the Gülen movement.

Journalist Mustafa Akyol, who stressed that Turkish history, experiences and sprit all differed from those of other Islamic countries, said it was possible to talk about a Turkish Islam, which he thought was represented by the Gülen movement. Akyol said the Gülen movement was one with roots that were established in a tradition dating back to Ottoman times and added that it showed how the Islamic world can be modernized in the real sense.

Meanwhile, Gülen sent a message to the participants of the conference thanking them for their contributions to an academic investigation of the problems of humanity and what Islam proposes as solutions. He also expressed his sadness at not being able to attend the conference due to health problems.

In his message Gülen said: “Through the endeavors of worthy people like yourselves, I hope that in the end we will be able to discover common values on which to establish a better world and to bring about peace and cooperation between peoples in the future. I hope that this altruistic movement, whatever it is called, will spread and will carry us to the desired horizon where cultures and civilizations can meet and reach a consensus. It is my perception that these activities, which have been put in action so far under the rubric of ‘understanding,’ ‘tolerance,’ and ‘dialogue,’ would be better if pursued from now on within the framework of emphasizing and gathering around universal human values and a framework of reciprocal respect for the position of those with different perceptions, beliefs and thoughts.”