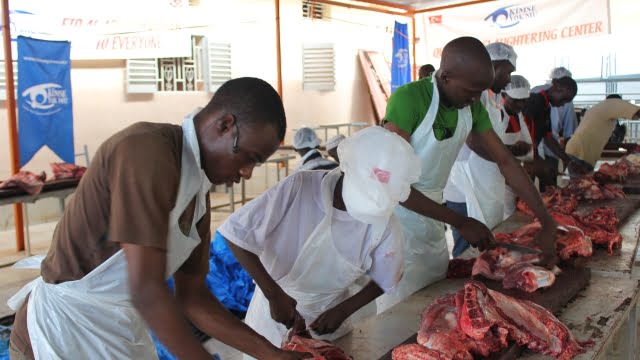 People flocked in the mosques for the edi prayer in the morning in the western Africa country Mali. They were all dressed in the traditional bubu attire.

Following the prayer and sermon, the Malians started the first day of the eid and went back home to fulfill their sacrifice duty. Animals were slaughtered next to the holes dug out for the blood, before the curious eyes of family members.

Mamadou Diarra, a young child, said, “We are a big family with seven siblings. So we had to slaughter cattle instead of sheep.”

Another Malian, Mariam Traore, recalled God sent a sheep to the prophet Abraham and the prophet Muhammad practiced this tradition. She slaughtered 10 of them. “We are so happy today because Allah let us present our sacrifices to him. We are thankful that we’ve been able to practice the tradition of the prophets Abraham and Muhammad. But not everyone can afford this. I would like to wish happy eid to all Muslims.

Although the country has had no Ebola case so far, the Malians were exchanging eid wishes without shaking hands just in case. They were just saying “sambe sambe” to each other.

Kimse Yok Mu volunteers from Turkey and other European countries handed the meat donations in packages to the needy in the suburbs of Bamako.