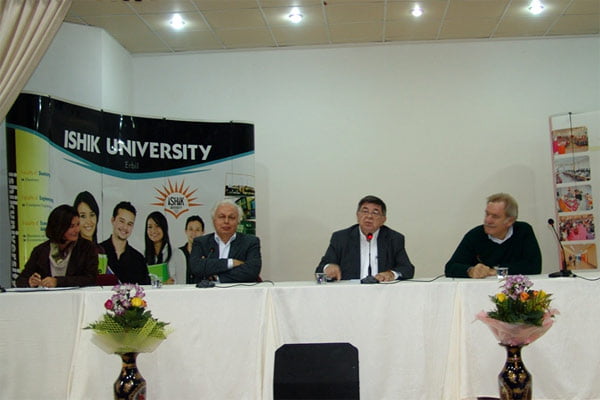 A panel titled “The Middle East from the Perspective of Intellectuals” was held at Arbil’s Ishik University, Northern Iraq, over the weekend. Around 200 people comprising citizens, academics and students attended the panel discussion, which lasted for four hours.

Talking about Turkey’s foreign policy in recent decades, Zeynep Dağı, a professor of international relations from TOBB University, argued that Turkey has switched from “siege” to “dialogue” and to a zero problems policy. Referring to her visit to the Middle East, Dağı said she was impressed by what she saw there, while expressing her belief “in the promising fruits of dialogue between Turkey and the Iraqi Kurdistan region.”

Underlining the need for a new constitution, Professor Ayhan Aktar said, “Turkey has a chance to overcome the infamous Eastern problem by making a new constitution.” Aktar explained the processes of Turkish and Kurdish nationalism in Turkey as he divided the development of nationalism into three stages: intellectual movement, middle class movement (mass movement) and the foundation of a one-nation state.

Providing an overview of the current condition of the Turkish economy, Professor Seyfettin Gürsel directed attention to possible threats despite the economic growth in recent years, the need to rebalance the process, the current account deficit (CAD) and its financing as well as structural problems. Gürsel argued that the growth in the economy may continue, though to a lesser degree, than in the previous decade.

In an effort to summarize the endeavor to consolidate democracy in Turkey, Dr. Şahin Alpay, a columnist for the Zaman daily, talked about the nature of Kemalism and its impact on the republic. The panel continued with a Q&A session.