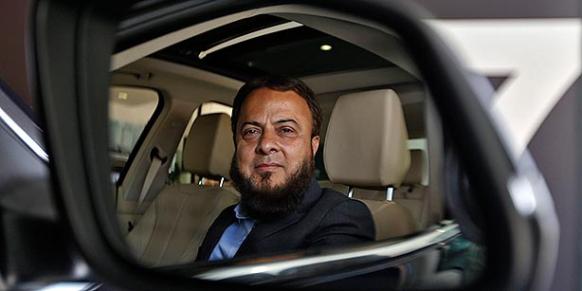 Indian businessman Zafar Sareshwala is seen in the western Indian city of Ahmedabad in this April 15 photo. (Photo: Reuters)

Zafar Yunus Sareshwala, CEO of the Mumbai-based Parsoli Corporation Ltd. and a close associate of Indian Prime Minister Narendra Modi, says it is important for the Muslims of the world, particularly Indian Muslims, to leave agitation and confrontation behind as miscommunication creates false impressions, resulting in their alienation and isolation.
Sareshwala was a victim of the 2002 Gujarat riots, a three-day period of inter-communal Hindu-Muslim violence in the western Indian state of Gujarat followed by further outbreaks of mass killings against the minority Muslim population for three months. He explained how he became a supporter of Prime Minister Modi, who was then the chief minister of Gujarat, during an interview with Today’s Zaman.

As his business was crippled by the deadly riots in the state of Gujarat, at the time Sareshwala fought against Modi, whose government was accused of initiating and condoning the violence against Muslims by considering taking Modi to the International Court of Justice. Frustrated with the agitational and confrontational moves Modi had made, Sareshwala decided to meet him in Gujarat’s city of Ahmadabad in 2003. “The perceptions which I had against Modi have changed as I had an illusion due to miscommunication,” Sareshwala said. Suggesting a consensus be reached among the Muslim communities before they reacted, Sareshwala said the demands of the community might be answered easily if they were presented in the framework of constructive dialogue.

Speaking on the increasing popularity of the Indian prime minister among Muslims, Sareshwala says 15 percent of the nearly 200 million Indian Muslims, mostly youth, voted for Modi in the 2014 elections. Sareshwala says he predicted Modi’s victory in 2012 because he saw the support Modi has among the country’s youth, which composes 65 percent of the 815 million-strong Indian electorate.

However, a large number of Indian Muslims are still hesitant in their approach to Modi’s Hindu nationalist Bharatiya Janata Party (BJP) government, says Sareshwala. Hopeful about the changing of prejudices toward Modi, Sareshwala says the Modi government’s practices improving the education level of the Muslim minority and providing direct access for Muslims to reach government funds will prove the sincerity of the BJP government.

Impressed by the works of Kimse Yok Mu, a charity inspired by the views of the Turkish Islamic scholar Fethullah Gülen which holds official UN consultative status, Sareshwala says the way Kimse Yok Mu conveys aid to people in need gives dignity back to the poor. That is what Muslims need to follow, even when they give zakah (alms) to the poor, Sareshwala added.

Sareshwala says Kimse Yok Mu plays an important role in social harmony by involving small, medium and large-sized corporations in charity work and bringing all sections of the community together to help each other.
After visiting the Kimse Yok Mu headquarters and Fatih University in İstanbul, Sareshwala noted that Fethullah Gülen, being one of the most important Islamic scholars not only in Turkey but also in the world, is important to Muslims by his example in educating youth and engaging in dialogue with people from different communities all over the world.

Minister of Food, Agriculture and Livestock Mr. Eker praised that people from all walks life in Diyarbakir are represented at the Iftar. He said Turkey’s regime had problems with his own people. The state had divided its people into races, colors and ethnicities, which created problems. “We have made important progress for the solution in the last seven months, we wish that the settlement process will end with peace,” he added.

The Journalists and Writers Foundation’s (GYV) Academic Thought Platform (ADP) came up with a remarkable program amid the ongoing heated debate over the use of the state authority and the relationship between the state and the civil society in our country.