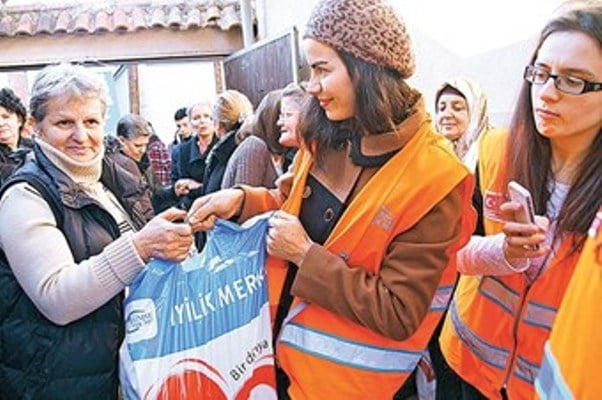 PRIZREN – Turkey did not stay silent to the tragedy taking place in Europe. A group of volunteers from Kimse Yok Mu Foundation (meaning ‘Is Anybody There?’ in Turkish) including actress Mujgan Koralturk and musician Aslihan Erkisi distributed the humanitarian aids provided by Turkish people to the needy in Prizren.

Trying to Heal the Wounds

Kimse Yok Mu Relief Foundation, Project Coordinator for Orphan Relief, Orhan Erdogan pointed out that the community is still trying to heal their wounds of Kosova war. Regarding the aids of the Foundation, Erdogan stated that they have brought in the aids to help them. He stated, “To shape their future, we are providing scholarships to the orphan children.”

Mahmudiye Berisha, 57, whose husband was martyred by Serbs, is hopeful of future while accepting donations. Berisha who has 6 children says, “I don’t have a house. We live by the help of municipality. I’m not complaining even though I’m saddened as I am raising my children without their father. Thank God, all of them are in school. My only hope for them is to have a bright future”.

Eighteen percent of Kosovo’s population live on the poverty line. In the country, where 68% of the population is extremely poor, 300,000 people live by 70 cents per day, 120,000 families survive by the help of charity organizations.