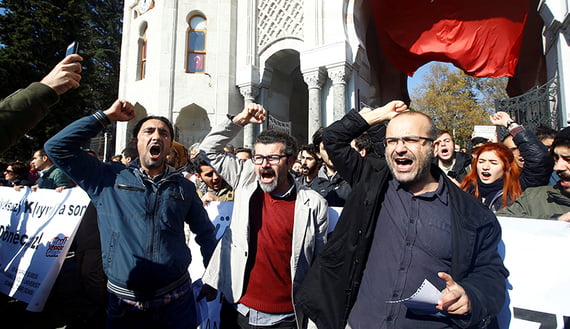 Demonstrators shout slogans during a protest against a purge of thousands of education staff since an attempted coup in July, in front of the main campus of Istanbul University at Beyazit square in Istanbul, Turkey, November 3, 2016. REUTERS/Osman Orsal

“May Allah protect us from the evil of well-educated.” It was the prayer of the Imam during the rallies of Erdogan supporters celebrating the thwarted coup attempt on July 15th. This remarkable moment concisely illustrates how Erdogan and his government has been handling Turkish intellectuals and professionals as he has moved sharply away from democratic rule and toward autocracy.

The government started the draconian purge in the very early hours of the coup-attempt. About 3,000 prosecutors or judges who had nothing to do with the coup were dismissed from their positions in the morning of July 16th, long before the streets were calmed down.  How the government prepared such a long purge list of judiciary members in a short time has raised many questions about the real motives behind the coup.

The purge has continued with an increasing vigor since then. Only four days after the coup-attempt, Turkey’s Council of Higher Education forced 1577 deans to resign from their positions at state and private universities. With the decree laws, the government has seized the institutions affiliated with the “Hizmet movement.” So far, 15 universities, and 800 dormitories have been shut down, and 6337 academicians were removed from their positions at Turkish universities. More than 60,000 university students remained in limbo. Along with the purge in higher education, 1284 schools of primary education were closed, more than 50,000 teachers in state schools have been forced to leave their jobs, and teaching licenses of 21,000 teachers in private sector were suspended.

The government canceled the passports of all public servants purged with a decree and imposed travel restrictions on them and their spouses. Visiting scholars were ordered to return to Turkey, and the university presidents’ permission has been a requirement when academicians are traveling out of the country. Academic freedom has been significantly restricted. In short, the entire educational system of Turkey has been crushed by the crackdown following the coup-attempt.

There is a general consensus: education leads to more democracy and educated individuals are more prone to live in a free society. Well-educated individuals are more likely to reject the top-down incentives. It is not easy to dictate and rule over an educated population, since they have been trained to be persuaded with reasoned arguments, not the threat of punishment. Authoritarian regimes undermine competency and professionalism and take the advantage of being loyal to repressive authority, which aims to regulate and control every aspect of social and daily life.

Looking at Erdogan’s views and policies in the Turkish educational system, one can better understand how the sweeping changes he made to the educational system facilitated his systematic indoctrination of the Turkish people. When he took power he began immediately to alter the educational system. It has become more clear that a person who was less educated, but more loyal to Erdogan and his party, is more valued than someone who is intellectually strong.  Mindless, less critical, but loyal, individuals are now considered to be the ideal citizens.

Erdogan was aware that the most effective and efficient way to unify people around him was establishing a new and fundamentally different education system. The thwarted coup-attempt was an opportunity served on a silver platter to Erdogan to consolidate his power. Erdogan use the coup-attempt as a pretext to make changes, drive out tens of thousands of academicians and teachers and replace the secular educational system with the one that indoctrinates youngsters into Erdogan’s belief system. Now, Turkey’s educational institutions are one entity with a single goal: to generate a formal state ideology around Erdogan and his party’s priorities.

The Turkish government has converted most of the, previously Hizmet Movement affiliated, government-seized secular modern schools to imam-hatip (religious vocational) high schools, where AKP has been successful in indoctrinating Turkish youth. The rising number of imam-hatip schools raises concerns, since these schools have been used as a state instrument to shape religion and religious ideology. These schools have been extremely criticized as being the “back yard” of Islamist political parties. Education in Turkish schools has turned to be an education of the will, rather than an educating of the mind.  The purpose of learning has turned to produce a generation who are blindly loyal to Erdogan and his regime.

By dismissing 50,000 teachers and revoking the licenses of more than 20,000 teachers, Erdogan dramatically purged the Education Ministry to ensure that all teachers abide by the dictates of his regime and its mission. In addition to limiting who could teach, the government also controlled the curriculum. Strong political elements are included in curricula. For instance, on the first day of the fall academic semester in 2016, Turkish students were made to watch a film related to the July 15 coup-attempt with the appearance of Erdogan.

Erdogan has understood that political propaganda is one of the key instruments to control public sentiment and hinder the influence of political opponents and their opinions. Turkish youth are not the only group hurt by the new education system. The entire population has been subjected to streets littered with state propaganda. Printed and digital media, TV and radio broadcasts, social media, TV series and films are now controlled by his government. The government has controlled the information sources, censored, outlawed, or destroyed books, documentaries, and materials deemed “dangerous.” Erdogan is using TV series, films, radio shows, educational materials, and the media as his tools of propaganda. This encourages passivity and acceptance of his regime and impending measures against his political dissents. It has made many Turkish people to believe that Erdogan and his party are providing stability and power and support the idea that Erdogan is “restoring order.”

The vast majority of the population has been sucked into the propaganda of the regime, and schools are now hotbeds of his propaganda. Erdogan is aware that the consensus on his regime cannot be created by democracy, but it can be built through the propaganda. He has been doing his best to monopolize all avenues of education.

In higher education, the restrictions following the coup attempt have significantly hindered the international collaboration of Turkish scholars and chances to build up their academic abilities. Going abroad for research, having interviews, organizing conferences or other intellectual activities are now all but impossible for Turkish scholars.

Erdogan’s education policies reflect his distrust of intellectuals and his lack of interest in universal education standards and intellectual pursuits. Universal and modern education promoting critical thinking seem to be the most corroding and disintegrating poison for his tyrannical regime.

Suat Cubukcu was purged from his position in the Turkish National Police (TNP) with a decree of State of Emergency on August 17th, 2016. The Turkish government has labeled him “a national security threat” and revoked his and his wife’s passports.  Mr. Cubukcu studied at the Police College, Police Academy, and Gazi University, respectively, before participating in the workforce of the TNP as a mid-level supervisor. He represented the TNP in the United Nations Peace Keeping Operations in the re-establishment of the Haitian National Police between 2007 and 2009. The Turkish government provided him scholarship to pursue his graduate studies in the US. He successfully completed his Masters’ in Sociology at the University of North Texas, and then moved to Washington D.C. to pursue a doctoral degree in the Justice, Law, and Criminology Department at American University in 2012. He focused on political violence and terrorism and wrote a dissertation, entitled “The Dark Figure of Terrorism.” Mr. Cubukcu is currently working as Adjunct Professor and Research Consultant at the American University, where he graduated just before the purge.