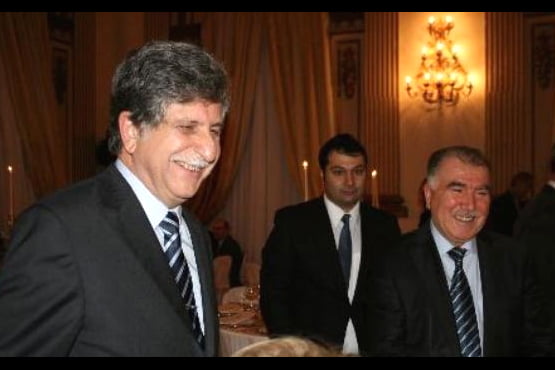 Zaman daily columnist Abdullah Aymaz (on the right), who was at the dinner, noted that only dialogue will make the world an island of peace and serenity.

Lawmakers, ambassadors, diplomats, academics and people from different walks of life came together for a friendship dinner in Rome on Thursday where they voiced their appreciation for the Hizmet movement and the values it promotes. The dinner, which brought together more than 200 people from different cultures, countries and professions, was organized by the Tevere Institute, a non-profit organization registered as a cultural association in Rome.

The dinner, which took place at Palazzo Brancaccio, marked the sixth anniversary of the foundation of the institute.

Delivering the inauguration speech at the event, Tevere Institute Chairman Mustafa Cenap Aydın said Rome has always been a city of tolerance and opened its arms to outsiders since the time of the Roman Empire.

Italian Senator Paolo Amato was the second to deliver a speech in which he said he is very impressed by Turkish scholar Fethullah Gülen, and that he wants Italian politicians and the Italian culture to get to know Gülen.

Gülen is an Islamic scholar who currently resides in the US. He promotes dialogue and communication among different cultures and faiths.

Praising the activities of the Tevere Institute, Amato said the institute should continue its studies, adding, “Because there are a lot of values we need to learn from you.”

Italian Democratic Party member Laura Froner offered her thanks to the Tevere Institute for its efforts to promote dialogue.

“Although Senator Amato and I have been cooperating for a while, we represent two different parties. Even this is sufficient to understand the potential capacity of dialogue. I think we all need to keep the doors of dialogue open,” she said.

Turkish Ambassador to the Vatican Kenan Gürsoy said such meetings give the opportunity to people to rediscover their inborn feelings.

Zaman daily columnist Abdullah Aymaz, who was at the dinner, noted that only dialogue will make the world an island of peace and serenity.

“A person is the enemy of what he or she does not know. We have to come together to get to know each other. Some say that this is very difficult, even more difficult than digging a well with a needle to find water. If the water is eventually found not by digging with a needle but even using hairs, this challenging task should definitely be made,” said Aymaz.

Australian Ambassador to the Vatican John McCarthy expressed his views about the organization at the end of the dinner. “We had a wonderful night in this fascinating city. It was a very meaningful night in Rome, which is the heart of interreligious dialogue,” he said.

During the program, a Turkish student Gülbahar Günay, who studies in Rome, gave a mini concert on kanun, a Turkish musical instrument.

Senator Amato, Froner and Gürsoy cut the “Friendhsip Cake” together and posed for photos. The dinner ended with the delivery of diş kirası or tooth fee, an Ottoman tradition of presenting guests gifts at the end of a meal.

Voicing his views about the event, Senator Amato said: “It was a wonderful night. The food was so good; this is very important for us, Italians, but the spiritual food was better because, this was a night that was filled with friendship, understanding and dialogue. Everyone who came here has seen that there is no harm in coming together to know and speak to each other. So, I offer my thanks to each and everyone at the Tevere Institute. In addition, I offer my thanks to Turkey for sending such great people to every part of the world.”

A group of about 130 people gathered at Redmond United Methodist Church (RUMC) for dinner on Sunday evening. But rather than a room full of Christians, as the venue may imply, the dinner was the Interfaith Friendship Iftar Dinner and contained a mix of members of the RUMC as well as members of thePacifica Institute […]