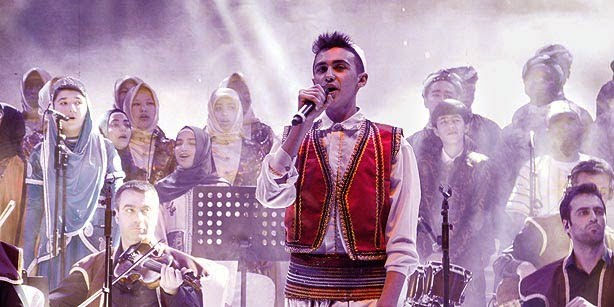 The event, organized by the Nilüfer Association for Friendship and Harmony in Gaziantep, had been planned to take place at a different venue, but the AK Party municipal government revoked the association’s permission to use the sports hall. Since the program aimed to celebrate Prophet Muhammad, the decision of the AK Party, which has a conservative constituency, drew criticism from the public.

The event, titled “Everybody talks about him one more time,” garnered great interest among local residents. A total of 76 students from 34 Turkish schools in various countries of the world performed, singing songs and reciting poems about Prophet Muhammad.

During the performance, many audience members were so moved that they burst into tears. One of the participants, Medine Kırıcı, described the students as “flowers” that had blossomed in the Turkish schools. Students from countries including Ethiopia and Somalia stood on the stage for about two hours.

The president of the Nilüfer Association for Friendship and Harmony, Cahit Erbalcı, said the night had been emotionally intense as he thanked the people who made it possible.

Another audience member, Cemile Kandilli, said she hoped to see more events like it in the future, adding that she had been touched by the performances. “These kids conquered our hearts,” said retired teacher Lütfü Bitirim.

The organizers launched a hashtag campaign to promote the event on Twitter, and people who watched the event on TV joined in with a barrage of social media posts.

Another audience member, Erhan Erturan, joined the others in thanking the organizers and the students, saying the event in Gaziantep helped him commemorate the prophet.

The event was held as part of celebrations of the birthday of Prophet Muhammad held in April each year in Turkey.

The movement that started out a quarter-century ago to support education for children abroad starting with the autonomous Azerbaijani republic of Nakhchivan has now reached 160 foreign countries, with the founders of the movement and its volunteers welcomed with open arms around the world.