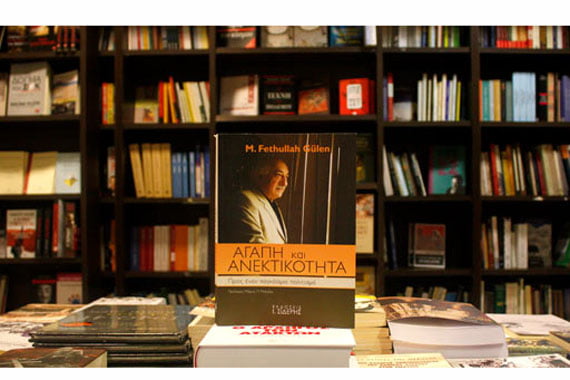 The book “Love in Human Essence” by Turkish Islamic scholar Fethullah Gülen has been translated into Greek with the title “Agapi ke Anektikotita,” Greek for “love and tolerance.” (Photo: Cihan, Yüksel Peçenek)

The book “Love in Human Essence” by Turkish Islamic scholar Fethullah Gülen, known as the pioneer of the Hizmet movement, has been translated into Greek with the title “Agapi ke Anektikotita,” Greek for “love and tolerance.”

The book, which was published by Sideris Publishing House a month ago, marks the first book by Gülen published in Greece. The preface of the book was written by Marios P. Begzos, dean of the theology department and professor of comparative religion on the Faculty of Theology at the University of Athens, and translated by Persa Koumoutsi, a novelist and literary translator who studied both Arabic and English literature at university.

The editor of the book, Sotirios S. Livas, a professor at Ionian University who lectures on Turkey and the Middle East, is best known for his work on the Hizmet movement.

The book consists of a collection of articles with titles such as “Love and Compassion,” “Ideal Person,” “Sufism and Metaphysics,” “Jihad-Terrorism and Human Rights” and “Education and Global Perspectives,” which address individuals with an approach refraining from any kind of discrimination concerning religion or nationality, focusing on the themes of love, tolerance and reconciliation and targeting the elimination of prejudice in the reader.

Begzos in his preface writes that through this book the Greek reader will enjoy the essence of the work of the Turkish Muslim scholar from the neighboring country. He further evaluates the book by saying that it looks at key global news and current issues from a broad perspective, taking interfaith dialogue as its base.

He adds that Gülen suggests an understanding of Islam in which theory and Islam are “melted in the same pot” and a tolerant approach is adopted with works in education carried out that are “beneficial for all across the world.”

The owner of Sideris, Andreas Sideris, expressing his satisfaction upon publishing a work by such a globally reputed intellectual, said Greek readers’ interest to the book has been high although it hasn’t been long since it was published.

The Greek press also paid much attention to the newly published book, as almost all leading dailies spared a place in their pages praising the work. To Vima, a Greek newspaper, devoted a whole page to recent work by the Islamic scholar, touching on the ideas of the Hizmet movement as well.

The article in To Vima, sharing quotes from the book, emphasized that Gülen’s idea of Islam is far from extremes and bases its ideology on love.

Fethullah Gulen’s book incorporates the concept of “faith” into those of “service, affection, compassion” and such.