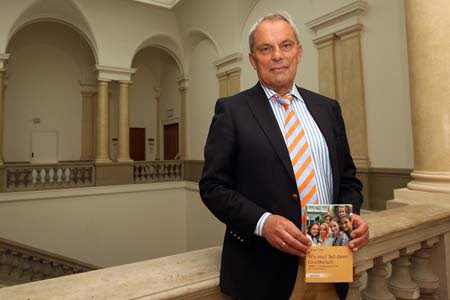 Dr. Jochen Thies’ new book focuses on Gulen-inspired Schools in Germany. Dr. Jochen Thies introduced the book he wrote about the schools opened in Germany by Turkish entrepreneurs: “We Are a Part of This Society-A Look at the Education Initiatives of the Gulen Movement”.

The event was held at the Berlin State Parliament, where Dr. Jochen Thies signed copies of his book entitled “We Are a Part of This Society-A Look at the Education Initiatives of the Gulen Movement”.

Though it may be different in other parts of the world, in Germany, Turks are not the first to come to mind when speaking of education. In fact, in regions like Berlin, where there is a big Turkish population, there is an established conviction that the higher the rate of Turkish students means the worse off that school is.

Again, despite the fact that education plays a crucial role in shaping the future of the children, it is known that the percentage of high school graduation is 40 for the German children and only around 10 percent in Turkish children.

Nonetheless, there are certain Turks who have made a good reputation for themselves in the educational field, for quite a long time. Hundreds of tutoring courses and many schools have been established in Germany, and these projects are being associated with the name Fethullah Gulen. Well then, which persons are behind these schools? Which schools have they established? What are their objectives, and what is the German public opinion towards these schools?

There is one book that is out on the market, answering these and other similar questions. The book carries the name “Wir sind Teil dieser Gesellschaft. Einblicke in die Bildungsinitiativen der Gülen-Bewegung” and has been published by the Herder Publishing House. The author of the book, Dr. Jochen Thies, aside from his historian identity, has done significant service throughout his life as a journalist.

Dr. Thies has also written the speeches for the former President Helmut Schmidt, director the foreign politics section of the Die Welt newspaper, served as the editorial director for the Europa-Archiv/Internationale Politik magazine and worked at top-end positions for the ARD television and the German Radio. He has also served as principal of a school during a certain period of his life. For his book, he visited the TUDESB High School in Berlin, Dialog in Koln, and the BIL schools in Stuttgart and made numerous interviews and held numerous meetings.

The introduction of the book took place at the Berlin State Parliament. At the introduction were many names alongside the author of the book, Dr. Jochen Thies, including Rabbi Prof. Walter Homolka; Expert on Bible Studies, Prof. Christoph Bultmann; former Foreign Secretary, Dr. Markus Meckel; and President of the Interkultureller Dialog e.V. Institute, Sociolog Ercan Karakoyun. Conducting the program was the Director of the German Orient Institute, Dr. Gunter Mulack. An extensive number of Turkish and German listeners joined the program.

During his speech, Dr. Gunter Mulack stated that in Kabil, the capital city of Afghanistan, the Turkish high school had superseded the German and French schools as the best school in the city. Prof. Bultmann, on the other hand, drew attention to the interesting attitude of the German Press Council (Deutscher Presserat)—which examines articles that have violated the moral principles for the press—towards the article published in Der Spiegel.

Prof. Bultmann called attention to the fact that in the article published some time ago in Der Spiegel magazine about Fethullah Gulen and the Hizmet Movement some of the opinions that had been given with reference to certain individuals had been distorted, that the German Press Council had twice examined and confirmed this to be true, yet, in an incomprehensible way, had not openly demanded that Der Spiegel magazine make the necessary corrections.

The last person to come up to the rostrum was Dr. Jochen Thies. He spoke about how his book came to be and continued by reading excerpts from the book. The author expressed that the publishing of the book was the result of the doors that were opened and the trust that was put in him.

The author spoke about how he had been full of hope as he started his research and interviews, but said that the things he saw and experienced had been way above his expectations. Dr. Thies also criticized the low interest of the German people towards the schools, and used these words of caution, “The Turks opened up like an oyster, but now they may close.”

The violent extremist ideology cannot be rooted out until an effective, coherent, comprehensive and well-reasoned counter-narrative is evolved. For that, all the theological, religious, political, historical, instrumental and socio-psychological underpinnings of the global jihadism have to be counter-argued and dismantled.