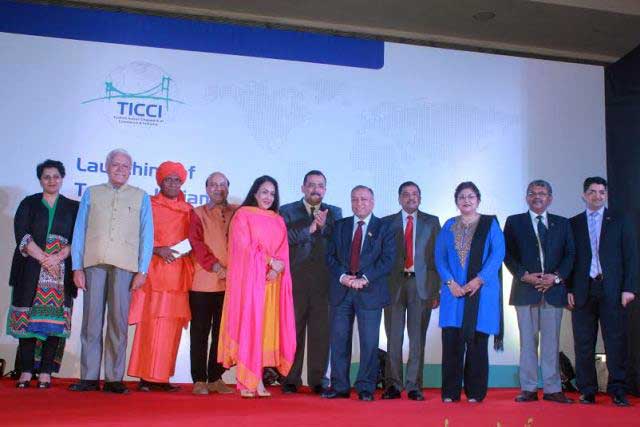 New Delhi: In a bid to give new fillip to trade between India and Turkey, a new chamber for commerce named as the Turkish Indian-Chambers of Commerce and Industry (TICCI) was launched at a well-attended ceremony of business leaders and industrialists here on Tuesday evening. It aims to promote commercial and trade links between both the countries by creating more networking and collaboration opportunities.

The new chamber is under the umbrella of TUSKON (Turkiye Industrialists and Businessmen Confederation) which is the largest non-governmental business network with seven business federations, 211 businessmen associations, and 55000 entrepreneurs in Turkey. It has six branch offices under TUSKON name and has partner organizations in 140 countries.

India and Turkey being the rapidly emerging economies of the world have enormous opportunities and potentials but these to be tapped. Both are also G-20 members and currently their volume of trade is estimated $6 billion. With 80 per cent export share, the balance of trade is heavily tilted in India’s favour. However, Turkey is much to offer for India’s burgeoning economy in infrastructure, automotive industry, renewable energy and investments and construction sectors.

Underlining the importance of encouraging bilateral commerce and joint ventures, TICCI president Ersin Karaoglan said Turkey is the East of the West and west of the East as its geopolitical value; the land had been the melting pot of the civilizations, cultures, traditions, faiths and tribes.

In his inaugural speech, Karaoglan threw light on business activities in Turkey adding that TICCI is representing Tuskon in India with six branches in Bangalore, Chennai, New Delhi, Hyderabad, Kolkata and Mumbai. He also offered that TICCI will also promote the “Make In India” campaign to attract Turkish companies to INVEST in Indian manufacturing. Construction, medical tourism, infrastructure and automotive parts business are some of the areas that hold potential for joint ventures between Turkish and Indian companies, he added. Being the member of EUs customs union and a candidate for membership to EU, Turkey plays a crucial role for the foreign countries to invest

Speaking on the occasion, Federation of Indian Chambers of Commerce and Industry (FICCI) president Jyotsna Suri suggested that Turkish and Indian businessmen can explore more investment opportunities in each other’s countries. She hoped that rising travel will facilitate further trade growth.

While Associated Chambers of Commerce and Industry of India (Assocham) secretary General D.S. Rawat stated that both the countries have tremendous potential to develop relations across all fields, including social and cultural. He said Assocham will have a dedicated desk to focus on business with Turkey.

It is worthy to be mentioned that Turkish contracting companies had finished 7500 projects outside of the country in last 40 years with a volume of $265 bn. Not only in contracting but also in manufacturing the construction materials, Turkey is ranked in top 12 countries of the world, mainly marble, mosaic, cement, steel and iron and also sanitary products are the items.

At the end, a dance troupe from Turkey has enthralled the audience by performing the whirling dervish dance.

BUĞRA KARDAN Turkish-Nigerian mutual trade could grow by leaps and bounds in the coming years as businesspeople from the two countries begin to show signs of greater interest in building partnerships and mutual investments. The African country’s deputy chief of mission in Ankara, Foluso Oluwole Adeshida, accompanied by the deputy head of the Nigerian Association […]

President Jacob Zuma has urged the Turkish business people to partner with the Chambers of Commerce in South Africa to help develop small businesses, transfer skills and create black industrialists.