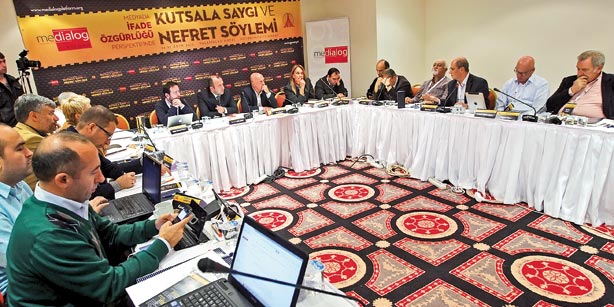 The Medialog Platform organized a meeting on hate speech and freedom of expression on Heybeliada over the weekend. (Photo: Today's Zaman)

In a two-day conference on hate speech and hate crime organized by Medialog (a platform under Journalists and Writers Foundation) in İstanbul, leading journalists and academics urged the [Turkish] government to draft a law against defamation, blasphemy and discrimination while protecting the freedom of expression.

Convening on Heybeliada, one of the Princes’ Islands in the Marmara Sea, the speakers of the meeting, which was titled “Hate Speech and Respect for the Sacred in the Perspective of Freedom of Expression in the Media,” emphasized the fact that no individual or group should be the subject of hate speech and/or hate crimes because of features they have no choice in, such as race or gender.

Author and Zaman daily columnist Ali Ünal said that there is no consensus among countries on the exact definition of a hate crime, just as there isn’t one for the description of terrorism. As a result, Ünal directed attention to the existence of debates over the vague line between hate speech and hate crime, how to place distance between hate speech and the right to freedom of expression and how to reconcile issues of hate speech with respect for sacred values.

“In the US, where hate speech is debated and committed the most, there are almost none, or very few, Muslims who have committed this crime. As a Muslim, I am in favor of a well prepared law against hate speech,” Ünal said, after pointing out that the FBI filed 8,208 hate crimes in 2010 in the United States.

According to Ünal, the common point everyone agrees on when it comes to hate speech or crimes is the existence of bias. “The fact is that we cannot have any choice over things like our birthplace, physical appearance or gender, and these should not be idealized, considered a source of pride or turned into a subject of hate speech,” Ünal said in his presentation.

Drawing parallels between the UN’s Universal Declaration of Human Rights (UDHR) and the principles of Islam, Ünal said that Islam aims to protect the main principals of human life, such as the right to life, right to private property, right to get married and reproduce, right to practice religion and the right to good health and its protection. Consequently, respect for religious faith and sacred values and objects is also among one’s basic rights and freedoms.

Academic Günal Kurşun provided real life examples of hate speech and said that a ban on the headscarf is a perfect example of a hate crime. “In 1998, I was a senior law school student. Due to a YÖK [Higher Education Board] decision, our classmates with headscarves were not allowed in the classrooms,” Kurşun said.

Star columnist Professor Bekir Berat Özipek, on the other hand, said that hate speech cannot be prevented by law, as it is a sociological phenomenon. According to him, an idea gains immunity when it is forbidden.

Among the participants of the two-day event were the vice president of the Journalists and Writers Foundation (GYV) Cemal Uşak; the editor in chief of Cihan News Agency, Abdülhamit Bilici; Professor Ayhan Aktar; author Ümit Fırat; the editor in chief of Today’s Zaman Dr. Bülent Keneş; Halime Gürbüz, a columnist for the Türkiye daily; the managing editor of Sky Türk 360, Temel Akgün; Murat Aksoy, a columnist for Yeni Şafak; Orhan Kemal Cengiz and Oral Çalışlar, columnists for Radikal; the deputy editor-in-chief of Zaman, Mehmet Kamış; the editor-in-chief of Samanyolu TV, Metin Yıkar; and the secretary-general of the Medialog Platform, Tercan Ali Baştürk. The meeting ended on Sunday with the announcement of a declaration.

The Medialog Platform is an industry advocacy group connected to the İstanbul-based Journalists and Writers Foundation (GYV). The GYV was founded in 1994, and the mission and work of the foundation are inspired by Islamic scholar Fethullah Gülen, known for his teachings of hizmet (service), tolerance and dialogue.

During Medialog Platform’s meeting titled “Medyada İfade Özgürlüğü Perspektifinde Kutsala Saygı ve Nefret Söylemi” (Hate speech and respect for the sacred from the perspective of freedom of expression in the media), there was consensus that the fight against hate speech and hate crimes is an important matter, both in Turkey and around the world.

The participants emphasized the determining role of some legal and illegal structures in the state in creating discrimination and hate crimes. In an effort to eliminate this problem, which leads to the victimization of individuals and groups, the following views were underlined:

1. It is necessary to amend the law to address hate crimes in Turkey.

2. While amending the law, the state should be careful not to place new obstacles ahead of freedom of expression.

3. The decision of the European Court of Human Rights (ECtHR) stipulating that blasphemy cannot be considered in the context of freedom of expression should be taken into account.

4. Approaches that threaten, devalue or portray individuals and groups as enemies or “otherize” them should be included under the definition of hate speech and not be considered as freedom of expression.

5. Legal precautions should not be considered as adequate and studies to raise awareness and sensitivities on hate speech and crimes should be conducted by means of the media, education, civil society and politics.

6. More effort should be made to monitor and expose unwitting blasphemy, especially in the media and politics. While doing this, new hate speech should be avoided.

7. Critiques of the acts and behaviors that are considered wrong by faiths and religious values without defamation, provocation, targeting or blasphemy should not be considered hate speech.

8. Individuals and groups should not be subjected to hate crimes or discriminated against due to their identities by birth or the ones that they gain later in life.

9. In an effort to prevent the misinterpretation of new laws on hate speech and crimes given the mistakes in the content and enforcement of certain laws in the Turkish Penal Code (TCK) (such as Articles 216 and 301) people’s awareness and knowledge about the law should be increased.