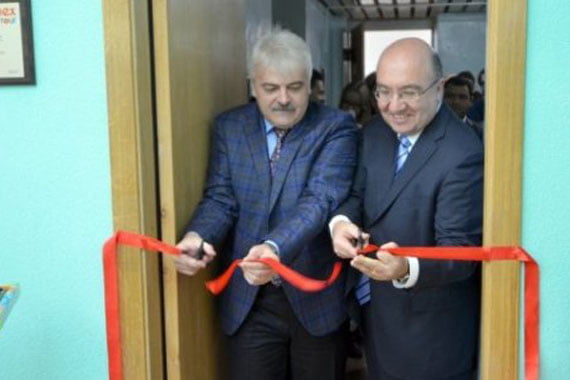 A new Turkish cultural center has been launched under the umbrella of Ukraine’s nearly two-century-old National Pedagogical Dragomanov University.

The center has been brought to life with the cooperation of International Meridian Educational Institutions and National Pedagogical Dragomanov University, under the auspices of Turkey’s Embassy to Kiev, Consultancy to Ministry of Culture and the company, Anex Tour.

In attendance of the center’s grand opening were Turkey’s Ambassador to Kiev, Mehmet Samsar; Vice-rector of National Pedagogical Dragomanov University, Bogdan Andrusisin along with officials from the Turkish Embassy, Turkish guests from the western city, Bursa; academics, Turkish businessmen and Meridian Schools’ students who are taking elective Turkish classes.

In his inaugural address, Turkish ambassador, Samsar said the center will not only introduce Turkish culture and language to Ukrainians but also bring the two nations closer. “Turkey and Ukraine have been enjoying excellent relations at every level. Culture and education both have crucial roles in this. The new center will not only teach Turkish language and its culture but, eventually, bring the two nations closer as well. I believe it will thus function as a significant bridge in between. In addition to English, Turkish language too will be offered, which indicates Turkey’s rising trend in the region. We therefore consider today’s opening as a momentous event. I would like to thank whoever is involved,” Samsar further remarked.

Next, the vice-rector Andrusisin highlighted the significance of public diplomacy and that the world needs more love, friendship and tolerance than it ever did before.

Turkish poem and song performances by Meridian Schools and Dragomanov University students livened up the event.

Excerpted from the article published [in Turkish] on Cihan, 22 October, 2013, Tuesday

In Istanbul, a modern bridge spans the Bosporus between Asia and Europe. Symbolically, the bridge reaching between the cultures of Turkey and the West, now extends also between Anatolian Muslims and Christians and Northern Illinois Conference United Methodists. At the invitation of the Niagara Foundation in Chicago, Bishop Hee-Soo Jung led a delegation of Northern […]