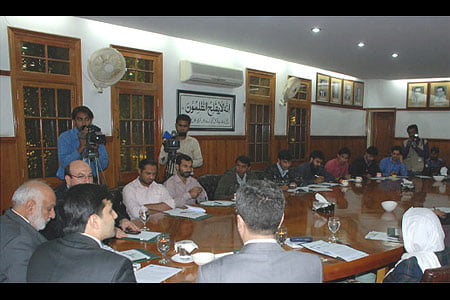 A press conference was held at the University of the Punjab in Lahore on Monday before the conference on Gülen's thoughts on ideal society. (Photo: Today’s Zaman)

A conference titled “Ideal Human & Ideal Society in the Thoughts of M. Fethullah Gülen,” seeking to extensively discuss the various dimensions of the Turkish Islamic scholar’s perspectives on an ideal society in a tumultuous time, started on Tuesday in Lahore.

A dinner hosted by the chief minister of Punjab, Muhammad Shahbaz Sharif, at Lahore’s Pearl Continental Hotel opened the conference. The conference continues on Wednesday at the law department of Punjab University. The main speaker of the day is well-known Muslim scholar Muhammed Çetin.

In a press conference held at the University of the Punjab in Lahore on Monday, Professor Dr. Liaqat Ali, the acting vice chancellor; Assistant Professor Maria Maldonado, director of International Linkages; Harun Köken, chairman of the Rumi Forum; and Hakan Yeşilova, editor-in-chief of The Fountain magazine, disclosed the details of the conference.

Professor Ali told reporters that the University of the Punjab had conferred an honorary doctorate on Gülen on May 17, 2012, in recognition of his contributions to education and peace, and that this conference will be a follow-up event.

Dedicated to exploring Gülen’s ideas on diverse issues, the conference will feature speakers and participants from a number of countries, including Australia, Indonesia, Singapore, Turkey, the United Kingdom and the US.