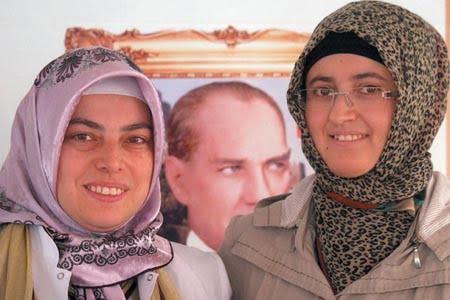 When Aynur Pazarci watched Benazir Bhutto on television, she would think of her as an elder sister. After spending her whole life in Turkey, Pazarrci felt connected to Pakistan long before she moved here seven years ago. Now, she serves as the vice principal of the Pak Turk International School’s guidance department.

What brings educationists, such as Aynur, here? “Pakistan and Turkey are like sister states,” she replied. “I know the lyrics to Jeevay, Jeevay Pakistan. I love Pakistani food.” Accepting that Karachi has its problems, Aynur is convinced that education can create a difference. The education provided here at Pak-Turk is not just for the sake of creating breadwinners, she said. “We are trying to create people who work hard and strive for a comfortable life. Not just gain privileges automatically.”

Aynur isn’t alone in this endeavour. There are 200 or more teachers working in Pak-Turk schools, according to the principal Ali Demirbas and “they work on a purely voluntary basis.”

Apart from its nominal cost motives, how does education here differ from that of other schools? “It’s not an alternative means to education,” said Demirbas, adding that they follow the Matric-Inter board. “But besides academic excellence, we encourage character building, for which we have in-house publications.”

However, it does not just end here. Teaching Turkish is also a part of the curriculum. “Children have no difficulty learning Turkish as Urdu is very similar to it,” said Elif, who teaches her native language at the school.

Hailing from Northern Turkey, Elif speaks about Pakistan, and its problems, most emotively. “When I was in secondary school, I used to see how countries such as Bosnia and Pakistan were really troubled,” she said. “I felt like I must do something. Make a difference from my side.”

After serving in Africa for three years, Elif has been living in Pakistan for three years now. “Sometimes, when there is violence here, children get scared and we tell them, we are here with them,” she said. “We are in the position to give, hence we must help out.”

Elif’s determination resonates with the same hope that drives the deputy education director, Mustafa. “Pakistan has a great student body. But for them to do things, you need to provide them with facilities,” he said, adding that education is the first step.

Mustafa, who has been living in Peshawar for three years now, said the children he has interacted with are hopeful for the better tomorrow. “In a competition called Pakistan in 2047, children wrote about an explosion-free Karachi and drew gas stations with smaller CNG lines,” he said. “One must look at things from a brighter perspective.”

The Turks in the small school recall Indian Muslims’ contributions to the feeble Ottoman Empire back in the 1920’s. Nine decades later, they arrived with a determination to pay back to what they call their sister nation.

Serving in a place that is marred with violence of all sorts, the principal of the school said, “We are here with a philanthropic motive. We aren’t here to disturb anyone – we believe no one will disturb us.”

Perhaps, this is what keeps them going.

Turkish educators set up schools in over 80 countries

According to a New York Times article on the same school, Pak-Turk International School is affiliated with a group of Turkish educators trying to portray Islam in a positive light.

They view Islam as a moderate and flexible religion that can coexist peacefully with other faiths. With this approach, the group has established schools in more than 80 countries. The article further mentioned that the model follows the brainchild of a Turkish Islamic scholar, Fethullah Gulen. “A preacher with millions of followers in Turkey, Gulen, 69, comes from a tradition of Sufism, an introspective, mystical strain of Islam.”