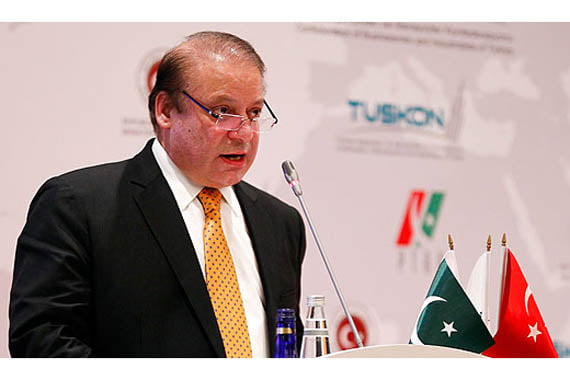 Turkey’s Eximbank, a state-controlled bank established to support exports, signed an agreement worth $300 million with the Pakistani government on Wednesday to provide financial aid to infrastructure and urbanization projects in Pakistan.
At the meeting, which was organized by the Turkish Confederation of Businessmen and Industrialists (TUSKON), Turkish Economy Minister Zafer Çağlayan, Pakistan Prime Minister Nawaz Sharif and TUSKON Chairman Rızanur Meral made speeches about improving trade relations.

Sharif referred to the economic and political developments being made in Pakistan and called on Turkish businessmen to increase their investments in the country, saying: “Pakistan has a better future and our agenda as the government is to raise the prosperity of the citizens in the country beginning with developing the economy, providing energy supply security and decreasing unemployment. We also plan to construct 500,000 new homes and the housing models implemented by the Housing Development Administration of Turkey [TOKİ] complete our vision. We ask Turkish constructors to take up real estate projects in the country as well as infrastructure.”

Meanwhile, Minister Çağlayan also pointed out the economic improvements taking place in Pakistan, adding that Pakistan’s enrichment would make Turkey happier. “Trade volume between the countries used to be $175 million 10 years ago; however, this figure has reached a billion dollars last year. We believe trade opportunities that will increase the volume will be laid in front us in the future.”

Commenting to Today’s Zaman at the meeting, Miftah Ismail, a businessman from Pakistan, said he will seek new opportunities in expanding his business in the plastic manufacturing sector to Turkey. Ismail stated that the purpose of him and other Pakistan delegates coming to Turkey was to hold business-to-business meetings with Turkish businessmen and government officials. “About a hundred delegates from Pakistan are here not only from the plastic sector, but the energy sector as well,” Ismail told Today’s Zaman.

Usame Postacı, a Turkish entrepreneur, said that his main aim in attending the forum was to gain knowledge about trading between Pakistan and Turkey. “This forum has opened up opportunities for Turkish and Pakistani businessman not only to expand their business in their field, but it has also opened up new opportunities in other sectors as well,” Postacı said.

6 April 2012 / TODAY’S ZAMAN, İSTANBUL The Turkish charity foundation Kimse Yok Mu (Is Anybody There) has begun to send aid to thousands of Syrian refugees who have escaped to Lebanon and Jordan from their conflict-stricken homeland. Tens of thousands of Syrian citizens have taken shelter in the neighboring countries of Turkey, Jordan and […]