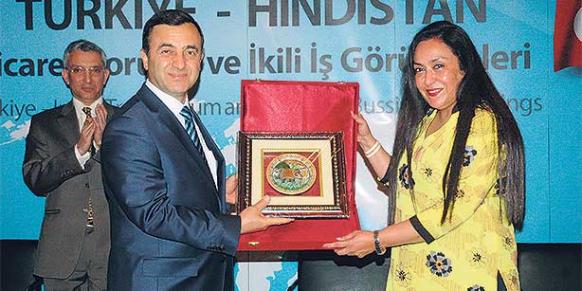 Turkish Confederation of Businessmen and Industrialists (TUSKON) President Rızanur Meral urged businessmen to consider opportunities for investment in India, particularly in light of the country’s massive population and developing economy, while speaking in İzmir on Thursday.

“India is a major player in the construction and textile industries, which are growing rapidly. There are serious opportunities to be found in the realm of precious stones, iron, steel, electrical appliances, fertilizer and chemical products. I highly recommend that Turkish businessmen evaluate these opportunities,” said Meral.

The TUSKON president addressed a crowd of 250 businessmen, 80 of whom were from India, at a forum on Turkey-India trade held prior to the 83rd Izmir International Fair, which began on Friday. “India has a large population comprising different belief systems and enjoys a climate of tolerance and tranquility. As such, it exists as a major example of democracy to the rest of the world. In spite of being a large country peace and security prevail. I encourage you to closely engage with India. You will be satisfied [if you do],” said Meral, who emphasized that India has the world’s second-largest population as well as its 10th-largest economy, which enjoys one of the world’s fastest growth rates at an average of 7 percent annually.

According to Meral, the trading volume between the countries should be brought to a more balanced level. “Annually we are selling $600 million in goods and buying $6.3 billion. We need to correct this together, people in the business world need to come together. For us India is very valuable. In the coming years, at TUSKON we are determined to contribute to the development of Turkish-Indian friendship. For this reason the Turkish schools in India are very important, and to strengthen our relationship we would like to see India open schools in Turkey,” he said.