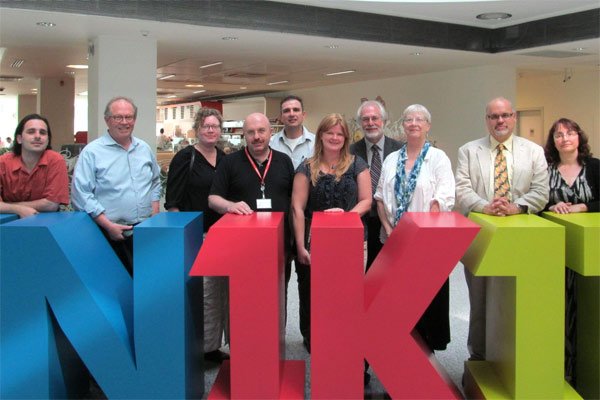 A small group of University of Iowa School of Journalism and Mass Communication (SJMC) faculty opened a line of dialogue with educators and professionals during a trip to Turkey last month. Hosted by the Niagara Foundation, a handful of SJMC faculty and eastern Iowa-area professionals travelled to Turkey June 15-24 to learn about the country and experience its culture.

“We ran out of adjectives to describe and superlatives to praise what we saw,” said David Perlmutter, SJMC director, of his experience on the trip.

The Niagara Foundation, a non-profit organization dedicated to “promoting global fellowship,” hosted the trip. The Foundation regularly organizes intercultural trips and other events to provide an opportunity for the healthy exchange of ideas. Niagara was founded and is supported by followers of the Turkish Imam Fethullah Gülen (who lives in the United States, near Niagara Falls).

Perlmutter, who learned about the Niagara Foundation while teaching at the University of Kansas, was asked to organize the outreach trip. He said this summer the Foundation is working with various sister alliances to send over 50 groups from across the United States to Turkey.

During the nine-day adventure, the group spent time in Istanbul, Izmir, Ephesus, Cappadocia and Kayseri. They met with professionals from a cross-section of industries, including newspaper editors, political leaders, business professionals, university presidents and professors, cultural curators and the country’s Chief Rabbi as well as ordinary citizens.

Vanessa Shelton, executive director of Quill and Scroll International Honorary Society for high school journalists, told of one evening during which they had dinner with a medical doctor and his friends.

“One of his friends was a big singing star [in Turkey] and another had just launched a magazine last year,” Shelton said. “He had some of the magazines with him and the discussion all night was on the publication and the next steps he should take instead of being focused on the singer,” she laughed.

Ambition is a common quality among Turkish people, according to Shelton, who also said a part of the country’s booming modernization is investing in its people’s education.

“They have a pretty solid vision of where they want to be as a country and it’s very admirable,” said Shelton.

This year alone, the government is opening 20 new universities, in addition to the private school sector.

“They are heavily invested in higher education,” said Perlmutter, who added that the country is looking to U.S. institutions to educate its young adults because there are not enough schools within its own borders.

In a newly thriving country, opportunities are endless.

“Turkey is seen as the key country in the Muslim and Middle and Near Eastern world. It’s looked to as a bellwether for other countries in terms of democracy and economic prosperity,” said Perlmutter. “It is in America’s interests for Turkish democracy and modernization to thrive.”

While Turkey’s innovation spreads through the country, Perlmutter and Shelton both saw opportunities to intersect it with Iowa life and enrich the lives of SJMC students. Perlmutter hopes that in the near future the school can develop a partnership of sorts with Turkey and its educators. Some of the opportunities he would like to see evolve include: recruiting from Turkish high schools, creating semester-abroad programs, having Iowa faculty travel to Turkey to teach and having their educators come to the University of Iowa to teach.

Shelton said she spoke with one newspaper editor who seemed attracted by the idea of high school journalists.

“It was interesting what the editor from Zaman has in mind exploring work with high school journalists,” said Shelton. “They have excellent, top-notch students there who would be eligible and a great addition to Quill and Scroll,” she said.

With the global economy, Perlmutter said it’s very likely graduates today might work in other countries, with people from other countries, or for a business or corporation that has locations across the world. “Being able to cross cultural and international boundaries and work for common goals is a basic job skill today.”

For more information on the Niagara Foundation, visit http://www.niagarafoundation.org/.