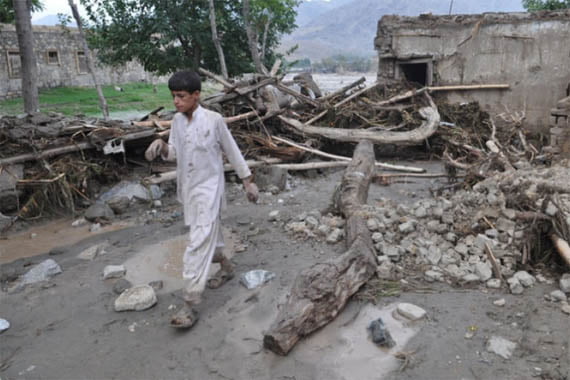 The aid raised by Kimse Yok Mu Foundation (KYM) for the 580 flood victims in Sarobi district of Afghanistan has been recently delivered to those in need. In cooperation with the local Afghan-Turkish schools and Afghan-Turk Industrialists and Businessmen Association (ATSIAD), the 580 families were also distributed food aid of floor and oil.

“The Surobi district of Kabul was hit and devastated by a flood about a month ago. The disaster left 30 locals dead and devastated the city. We’ve come here to deliver the aid from Turkey,” said secretary-general of Afghan-Turk Industrialists and Businessmen Association, Suheyl Ural.

“We’ve transported an amount of aid for some five thousand. We’ve been able to hand the packages to six thousand, as each family consists of eight members on average. We would like to thank everyone for contributing from Turkey. We hope their help carries on. We believe the Afghan-Turk brotherhood will thus grow stronger,” Ural further noted.

Surobi district governor, Cebbar Metin said, “We are happy to have Turkey, as a Muslim and sister country, by our side in our good times and bad times. On behalf of the Afghan people and state, I would like to thank them for their humanitarian aid. I would also like to thank KYM and the Afghan-Turkish Schools for making this possible.”

“My name is Turgul. I live in Surobi district. I’m happy to have received aid package of flour and oil from our Turkish friends,” an old, aid recipient said to express his feelings.