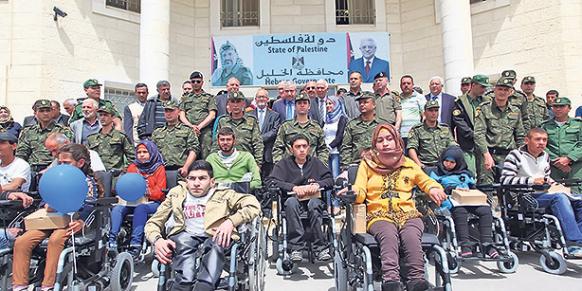 The goal is that these small, electric wheelchairs will allow the disabled recipients to be more mobile and provide the means for a more active role in their daily lives.

In his speech at the ceremony marking the delivery of the electric wheelchairs, Hebron Governor Kamel Hmeid thanked Kimse Yok Mu and the Turkish people who donated to the charitable organisation.

“I greet the esteemed Turkish people on behalf of all Palestinians. I express my gratitude to Kimse Yok Mu for showing solidarity with the people of this land whenever they are in need of help and humanitarian assistance. When a natural disaster took place, you were here for search and rescue efforts. You supported us in terms of providing shelter. After you built those homes, you then showed great effort in providing household goods for those needy people. Now you are showing solidarity with our handicapped people by donating these electric wheelchairs,” Governor Hmeid said.

The Jerusalem office director of Kimse Yok Mu, Harun Tokak, said Turks will continue to offer their assistance to Palestinians as much as they can.