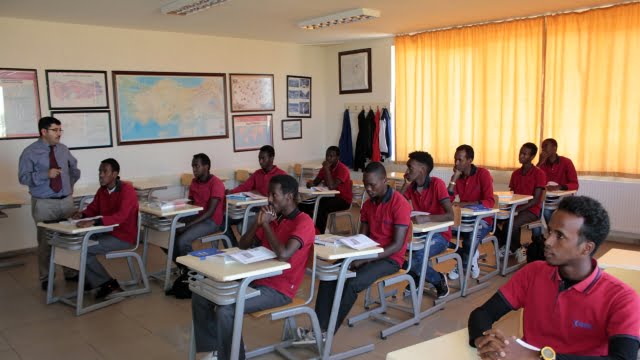 The government’s recent move to rescind the organization’s license to collect donation drew criticisms from various circles. Besides the foundation officials, several NGOs and politicians, the student recipients too reacted to the decision.

KYM brought over 350 high school students to Turkey three years ago and has been sponsoring them ever since in their studies. 12 of them, 9 Somali and 3 Congolese students currently at grade 12, have been studying at Kilicarslan High School and fear the decision will affect their education in a negative way.

“Thanks Allah Kimse Yok Mu brought us here,” said the Somali Eyup Ali Hassan. “It’s been still funding our every expense from education to food. We are also receiving monetary assistance.” Hassan noted he was introduced to Turkey through KYM and recalled the foundation built a hospital, water wells and a orphanage in his country. Regarding the government’s recent decision to rescind the foundation’s license to collect donation, he said, “As far as I’m concerned, the government is against KYM. But if it wasn’t for KYM, we would have been able to come here and study at high schools and universities. I would like to go back to my country and serve for our people’s benefit after graduation.”

Another student, Muhammed Kasım Addow, said he will tell about the good moments he experienced in Turkey when he returns his country. “Many thanks to Kimse Yok Mu contributing to our education.”

The school’s vice-principal Cumhur Cetin, who is like a second father to the foreign students, stressed the donations need to continue for the education of these students. “If these donations stop, I think, it will not be good for the future of both these students and their countries. This organization should its existence for the sake of all the aid efforts around the globe.”