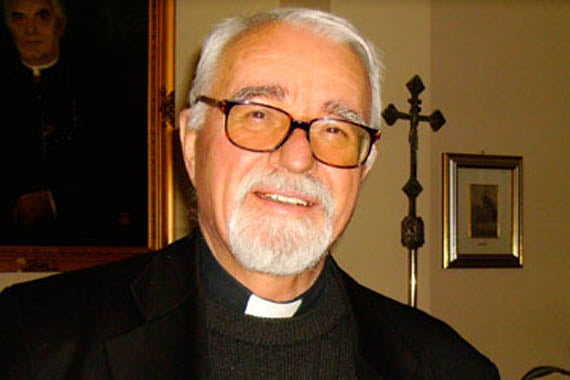 The spiritual leader of the Latin Catholic Community, Louis Pelatre

Speaking at the Dialogue Symposium held in İstanbul on Friday, the spiritual leader of the Latin Catholic Community, Louis Pelatre said some states abuse religion for wars although all religions prohibit killing and war.

“We have to fight against prejudices in order to prevent the use of religion in wars,” said Pelatre as he commended the interfaith dialogue efforts of Islamic scholar Fethullah Gülen.

The Intercultural Dialogue Platform (KADİP) of the Journalists and Writers Foundation (GYV) organized the symposium together with the Turkish Catholic Christian Community in the guesthouse of the St. Etienne Church in Yeşilköy.

As participants agreed that all religions prohibit killing, GYV Vice President Cemal Uşak said religions have become a source of conflict throughout history while they should be the guarantor of peace and tranquility in terms of their essence. According to him, some people focus on differences and lead to conflicts based on religion. Instead, Uşak suggested people focus on the common points among people and faiths. Noting that he found the symposium very meaningful, Uşak said, “If our faiths and work on interfaith dialogue do not help to ease the pain, we have to question our faiths.”

The theme of the symposium was “Being concerned about the other” this year. In the previous years, issues such as similarities and common values in Islam and Christianity, “Being a Pilgrim” and “Being a Foreigner” had been debated by the participants. The head of KADİP, Professor Suat Yıldırım; the former mufti of İstanbul, Professor Mustafa Çağrıcı; and a member of the French Institute for Anatolian Studies (IFEA), Dr. Alberto Ambrosio, were some of the participants in the symposium.

Delivering the opening speech of the symposium, Professor Yıldırım said people suffer from a lack of communication despite living side by side. Referring to the first initiative of Islamic scholar Gülen in 1993 to promote interfaith dialogue, Yıldırım said KADİP was also established with a similar aim. “For almost 20 years we have been acting towards this end and serving peace,” he said.

Stating that Gülen was criticized and that certain rumors about him were circulated in Turkey when he first initiated interfaith dialogue, Yıldırım said that “great leaders are people who do useful things by taking risks, and Gülen did what his religion required him to do.”

Providing examples from the accusations hurled against Gülen during the Feb. 28, 1997 coup era, Yıldırım said that when Gülen was tried on the grounds that he had established a terrorist organization, the then-representative of the Vatican in İstanbul, Monsignor George Maroviç went to the court as a witness. According to Yıldırım, this incident is a rare example in which a minority in Turkey showed the courage [to defend Gülen]. Maroviç said they got to know the smiling face of Islam through Gülen. According to him, Maroviç’s testimony was one of the greatest examples of being concerned about another.