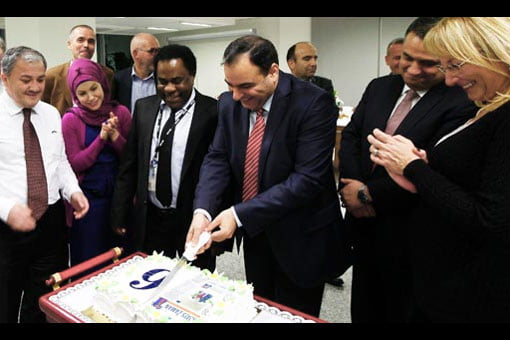 On the occasion of the sixth anniversary of Today’s Zaman, senior leaders of the governing and opposition parties as well as Ankara-based foreign diplomats expressed their appreciation for the daily as an important source of information on Turkey.

They described Today’s Zaman, the largest-circulated English daily in Turkey, as an indispensable and reliable source of information for both those inside and outside Turkey who want to have a better understanding of the country.

“For us, Today’s Zaman is a must,” Mohamed El Fatah Naciri, the representative of the Arab League in Turkey, has said, noting that Today’s Zaman makes it much easier for foreign diplomats in Turkey to follow issues on the country’s domestic and foreign policy agenda.

The English-language daily was launched on Jan. 16, 2007 with the aim of presenting a clear picture of Turkey to the Anglophone world. The daily, which has been acknowledged as a reliable source of news and analysis during the six years it has been in existence, has a daily circulation figure of over 10,000.

Affirming that Today’s Zaman provides accurate information regarding the developments in Turkey and the region, Colombian Ambassador to Turkey Fernando Panesso Serna said: “It is a very good and an open-minded newspaper. We are happy to read it every day,” also adding, “On Saturdays, I come to the embassy just to pick up the paper.”

The efforts made by the daily are appreciated by politicians as well. Praising the role Today’s Zaman has played as a representative of the Turkish media abroad, Deputy Prime Minister Bülent Arınç said: “It’s an important need that news stories which relate developments about Turkey be communicated to the international public from Turkey’s viewpoint.” Deputy Prime Minister Bekir Bozdağ commented that it is obvious, when looking at the past six years, that the daily has successfully filled a huge void. Noting that the daily has played an important role in communicating the transformation Turkey has been going through to people both inside and outside Turkey, he stated: “The daily has served an important mission by propagating the steps which paved the way for Turkey to transform into a global player to academics both in and outside of Turkey.” Turkey’s Foreign Minister Ahmet Davutoğlu expressed praise for the performance of the daily, drawing attention to the importance Today’s Zaman has for foreigners living in Turkey as well as observers following Turkish foreign policy.

Since the day it was first published, the daily has been a staunch supporter of the process of democratization in Turkey and the country’s membership in the European Union.

“A free, vibrant and diverse media landscape is essential for all democracies – generating informed analysis, offering the ordinary citizen access to independent sources of information and serving to hold the political authority to account – and freedom of expression a key element of the political criteria for all countries seeking to join the EU.”, the Head of the EU Delegation to Turkey, Ambassador Jean-Maurice Ripert said.

“On the occasion of the sixth anniversary of publication of Today’s Zaman, which is one of the leading English-language dailies reporting on the complexities of political life in Turkey, I wish you all the best.” Ripert added.

Turkey’s European Union Affairs Minister Egemen Bağış congratulated Today’s Zaman for the support it provided to Turkey’s EU bid and to the reforms effectuated by Turkey as part of efforts to ensure compliance of the country’s legislation with that of the EU. Describing the daily as a bridge for dialogue which links Turkey to the world, “With its editorial line in publishing, highlighting accuracy, trustworthiness and objectivity, Today’s Zaman is a prestigious daily which offers news coverage to international standards,” Bağış commented.

With more than 50 columnists from various segments of society currently contributing to Today’s Zaman, the daily represents a wide platform through which various opinions have the possibility of being expressed. It’s become, as it were, a window into the intellectual diversity of Turkey, and it’s obviously thanks to these very qualities that the daily enjoys a large readership both inside and outside Turkey.

“After my interview with Today’s Zaman many people congratulated me. This shows that Today’s Zaman has a large readership,” said the top Colombian envoy, who confided that he often sends the web links to some stories in Today’s Zaman to the Foreign Ministry in Colombia.

Akif Hamzaçebi, parliamentary group deputy chairman of the main opposition Republican People’s Party (CHP), congratulated Today’s Zaman for having a large readership, particularly abroad. “It’s a success for a daily published in English [in Turkey] to reach its seventh year. It is something which the daily deserves to be congratulated for that it has a record number of readers and web followers,” he said.

Congratulating Today’s Zaman on its sixth anniversary, British Ambassador to Turkey David Reddaway said, “It’s essential reading for anyone trying to understand Turkey,” while Francis J. Ricciardone, the US ambassador, praised the daily for providing diplomats who follow Turkey closely with “timely, accurate and significant coverage.” Noting that free media is vital for all democracies, “Today’s Zaman covers the diverse spectrum of Turkey’s vibrant political and social landscape,” he added.

Susmita Gongulee Thomas, Indian ambassador to Ankara, said, in her congratulatory message, that the Indian Embassy follows the stories and columns in the daily on a daily basis to keep informed about politics in Turkey, and added: “Your perceptive analysis of the many topical issues and wide coverage of international issues facilitates our functioning here.”

Salih Kapusuz, deputy chairman of the Justice and Development Party (AK Party), is another politician who offered his congratulations. Describing the mission the daily adopted for itself as important, he said: “[The daily] has not only served to provide foreign diplomats and researchers from around the world with accurate information about Turkey, but it also presents Turkey as it really is,” also adding: “Today’s Zaman has also allowed the Zaman conglomerate to communicate the concept of honest media, in the direction of which the conglomerate has made important progress [in Turkey], to the international platform.”

Jorge Arancibia, Chilean ambassador to Turkey, said, in his congratulatory message, that he follows Today’s Zaman, which, he believes, presents dynamic information in an attractive way, every day, while the first-ever Sri Lankan ambassador to Turkey, Bharathi Davina Wijeratne, said Today’s Zaman contributed to the strengthening of relations between Turkey and Sri Lanka with the news stories it has published. “Every day I start my day with Today’s Zaman, which is the source of accurate news. My exclusive interview with Today’s Zaman got great attention in Sri Lanka as well as in Turkey,” said Wijeratne.

Turkey’s history of English-language dailies dates back to the 1960s. However, Today’s Zaman has brought a brand new perspective with its high quality in terms of content, language and design. But more than the printed version of the daily, it’s the online version which has allowed Today’s Zaman to reach readers all over the world. In an effort to widen its sphere of influence, the daily launched a digital-first editorial policy in May 2011, and the website “todayszaman.com” gets millions of hits yearly.

The data for the year 2012 indicates that last year the daily’s website was accessed by 3.1 million unique users from around the world, receiving approximately 30 million hits. The United States, the United Kingdom, Canada, Germany, Australia, the Netherlands, Greece and India are the top countries from which the daily’s website is visited most frequently.