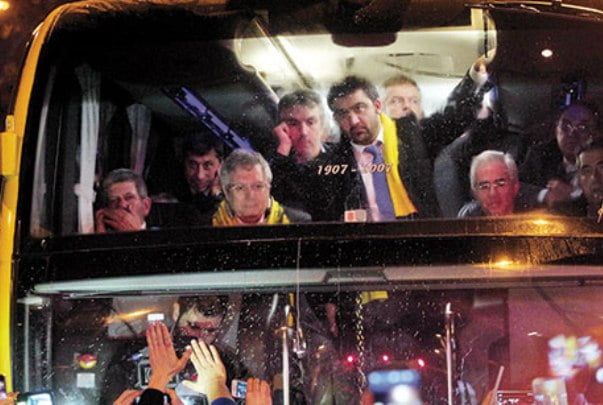 Fenerbahçe Chairman Aziz Yıldırım has called on his club’s fans to march on Sunday for “justice for Turkey and Fenerbahçe” in İstanbul.

Yıldırım, speaking on CNN Türk, urged Fenerbahçe fans to attend the rally. “No one can hinder the demonstrations for Ali İsmail Korkmaz. Fener supporters will chant. If you are going to suppress it, people will riot and it won’t end well.”

Korkmaz, a youth killed by policemen after he participated in a Gezi Park protest in Eskişehir in June, has become a symbol of resistance in Turkey.

A group of Fenerbahçe supporters and riot police faced off at the end of December 2013, when hundreds of youths chanted Korkmaz’s name in slogans before a Spor Toto Super League Fenerbahçe-Kayserispor match in Kadıköy’s Şükrü Saracoğlu Stadium. Fenerbahçe fans, venting frustration over a graft scandal that erupted on Dec. 17 with the detention of prominent businessmen close to Prime Minister Recep Tayyip Erdoğan and three ministers’ sons, chanted “everywhere is corruption, everywhere is bribery” and called on the government to resign.

Yıldırım pledged to attend the rally himself, adding that the demonstration is being organized by lawyers working for Fenerbahçe fan associations. Though he denounced insulting and obscene chants, Yıldırım defended fans’ right to chant at the 34th minute of football matches, which has become a widespread practice in Turkey since the Gezi Park demonstrations. Thirty-four is the registration number for İstanbul license plates.
‘Gülen’s audio recordings are part of operation’

“We consider the dissemination … of wiretaps of Fethullah Gülen Hocaefendi’s conversations an operation, and we condemn and refuse to accept these kinds of activities,” Yıldırım said.

Gülen filed criminal complaints over the illegal wiretaps and against the media outlets and websites that published the distorted voice recordings in an attempt to defame the scholar.

“I have never gotten acquainted with Fethullah Gülen,” Yıldırım said. “However, we talked over the phone after I got out of jail. He wished me well and said that he does not wish me any harm.”

Yıldırım, who was serving a sentence for match-fixing, had been quoted by some media outlets as accusing a Hizmet-controlled group of orchestrating a plot against him.

“When I was in jail I asked who led the operation [against me]. The people who were visiting me said that it was orchestrated by Cemaat [the Hizmet movement, inspired by Gülen’s teachings. They said the Cemaat management did not take any initiative, but that the plot could have been carried out by low-level members. Those who are close to the government deny the government’s involvement as well,” Yıldırım said, adding, “Then there is [an Operation] Gladio carried out by neither Cemaat nor the government.”