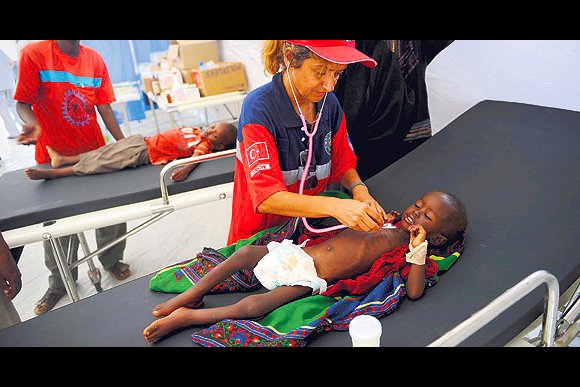 Kimse Yok Mu has organized regular trips for Turkish doctors to provide medical care to the poor and needy in Somalia. A group of 30 Turkish doctors goes to Somalia every 20 days and leaves when a new group of doctors arrives.

Kimse Yok Mu is also renovating Banadir Hospital in Mogadishu, the largest in the entire country, after signing a protocol with the Somali government in October. The charity group plans to spend nearly $10 million to repair the hospital, which still bears the signs of a longstanding civil war in every corner of the building. The charity group provided the essential equipment and materials for the hospital. Hospital personnel were sent to Turkey on an internship.

In the London Conference on Somalia, held last month, world leaders pledged to help tackle terrorism and piracy in Somalia but insisted that the East African state must quickly form a stable government and threatened penalties against those who hamper its progress.

Nations including Turkey also pledged new funding, additional training for soldiers and the coast guard, increased cooperation on terrorism and a new drive to root out those who finance and profit from piracy. Somalia has had transitional administrations for the past seven years but has not had a functioning central government since 1991, when warlords overthrew a longtime dictator and turned on each other, plunging the nation into chaos.

Turkey announced that it will host a follow-up summit on Somalia’s future in June to further shore up support for the East African nation.

Kimse Yok Mu Foundation continues its efforts in the Gaza Strip. Kimse Yok Mu, in cooperation with its local affiliates, recently geared up to focus more on the region having limited connection with the world due to the blockade. KYM Palestine office is coordinating the efforts in Gaza. The foundation’s director for international efforts Yusuf […]

The contest aims to ensure students are informed about philosophies and civilizations of world nations and promote tolerance and dialogue among civilizations and contribute to the emergence of a generation of young intellectuals.