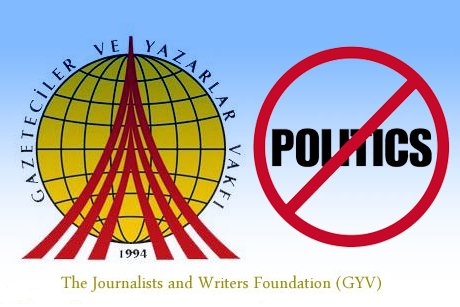 The Journalists and Writers Foundation (GYV), whose honorary chairman is Turkish Islamic scholar Fethullah Gülen, released a statement on its website on Wednesday in which it strongly rejected rumors spread in the Turkish media that the Hizmet movement is planning to form a political party.
“The movement, which spends all its energy contributing to peace in Turkey and in many other countries of the world, has no plans to establish a political party and it never will,” the statement said in response to claims that are spreading now that Turkey is scheduled to have local elections in a several months time.

The statement said it is both practically and theoretically impossible for the movement to form a political party or to support a specific party, as it has volunteers from many different political ideologies.

“This movement, which has no other goals than to serve humanity, would only advise its volunteers to form their political stances according to certain principles, like human rights, democracy, transparency, justice, pluralism, rule of law and freedom of expression and belief,” the statement said.

The GYV added that it is lawful and constructive to be in politics and that a person who has been a part of Hizmet circles can surely go into politics if he so chooses. The statement said an individual’s political stance should not be mixed with the Hizmet’s guiding principles, one of which is that it will not form a political party or support a specific party.

Our country is nearing a period of elections when several elections will be held consecutively. The impending elections and associated climate naturally give rise to a host of debates and claims. This diversity is quite natural in a democratic society.

In the ever-increasing heat of nearing elections, the claim that the Hizmet movement “is working to establish a political party” is being voiced by different individuals and circles.

Yet, this superficial and baseless claim stems from the failure to grasp the minimum social dynamics required to make sense of Turkey’s political scene as well as the Community, whose sole aim is to serve mankind. It is sad and surprising to see such claims parroted by certain people, who are incapable of understanding the sociological foundations of Turkey and the service-oriented Community respected by many groups.

The Community is determined to spend all its potential and energy to boost peace for mankind both in Turkey and in many countries around the globe, and it does not and never will have an agenda to establish a political party. The Hizmet movement always encourages volunteers to concentrate their energy on civilian projects that would build a culture of peaceful coexistence for humankind.

Considering the fact that similar claims may pop up in the run-up to the elections, we believe it will be beneficial to stress certain points regarding the Community’s approach to politics.

1. It is impossible, both theoretically and in practical terms, for the Community, consisting of volunteers from different political ideologies, to establish a political party directly or indirectly, or to be affiliated with any political party — which is another false, unfounded claim that is occasionally voiced.

2. Nurturing no goal other than serving mankind, the Community recommends that the volunteers who are devoted to this goal should define their relationship with politics against certain values and principles, particularly including human rights, democracy, transparent and fair administration, pluralism, the rule of law, and freedom of faith and expression. Any political party that properly upholds these values is preferred.

3. On the other hand, it is legitimate and beneficial to the country for anyone to engage in politics. Therefore, it is quite natural for any individual who is inspired by the Community’s cultural basin to make a personal decision to pursue a political career. The Community’s principle of “not establishing any party and not being affiliated with any political party” should not be confused with certain individuals’ personal preferences to engage in active politics, even if they have links to the Community.