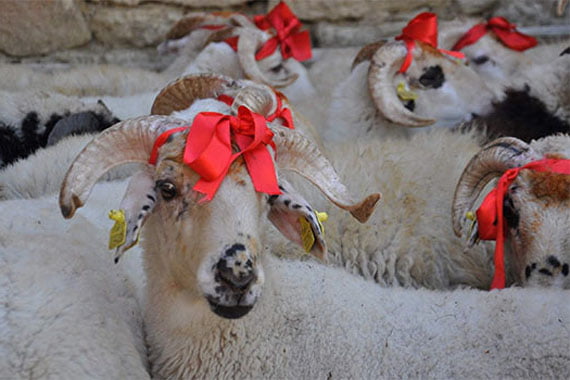 Various Turkish charity organizations have wrapped up their preparations to deliver aid, including sacrificial meat and other forms of assistance, to people in need across Turkey and around the world during Eid al-Adha, an Islamic holiday celebrated by millions around the globe.

Turkish charities are especially busy during the Eid al-Adha season, collecting money and sacrificing animals, packaging the meat and distributing it to the less fortunate. The main aim is to help ease the suffering of people in need and promote fraternity among nations. Aid organizations such as Kimse Yok Mu (Is Anybody There), the Humanitarian Aid Foundation (İHH), Doctors Worldwide, Cansuyu, Deniz Feneri, the Aziz Mahmûd Hüdâyi Foundation and Yardımeli are just some of the organizations that will slaughter sacrificial animals in Turkey’s 81 provinces and more than 114 countries in the world.

For Muslims around the globe, Eid al-Adha is one of the most important religious holidays of the year. During this four-day holiday, they recall the Prophet Abraham’s willingness to sacrifice his son as an act of obedience to God, before God intervened to provide him with a ram to sacrifice instead.

Muslims likewise sacrifice an animal as an act of their obedience to God. The meat from the sacrifice is divided into three parts — the family keeps one-third, another third is given to friends and neighbors and the last share is donated to those in need. Today, many in Turkey opt to pay someone else to sacrifice an animal in their name instead of heading down to the butcher to do it themselves.

While Kimse Yok Mu will slaughter sacrificial animals in 100 countries, the İHH will do so in 114 countries and Deniz Feneri will try to put a smile on the faces of the poor in 23 countries.

Kimse Yok Mu aims to deliver Eid al-Adha aid to 300,000 families in need. Volunteers who set out with the motto of “Kurbanını Paylaş, Kardeşliği Yaşat” (Share Your Kurban, Keep Brotherhood Alive) will slaughter animals in various countries in Africa, Asia, the Middle East, the Balkans and South America.

In Turkey, volunteers from Kimse Yok Mu will take aid packages including sacrificial meat to the houses of the poor.

In remarks to Today’s Zaman, Kimse Yok Mu Chairman İsmail Cingöz said the foundation aims to establish bridges of peace between 300,000 families across the world during this Eid al-Adha.

Countries such as Afghanistan, Bangladesh, Bosnia and Herzegovina, Ethiopia, Ivory Coast, Palestine, Ghana, Iraq, Kazakhstan, Kyrgyzstan, Macedonia, Mongolia, Mauritania, Mozambique, Niger, Pakistan, Somalia, Sri Lanka, Sudan, Syria, Tanzania and Yemen will be some of the countries in which Deniz Feneri will be operating during Eid al-Adha.

The İHH, which has so far purchased 40,000 sacrificial animals, plans to make this figure 50,000 before the first day of Eid al-Adha, which will begin on Tuesday.

Yardımeli Foundation is ready to slaughter sacrificial animals in 30 countries and 40 regions around the world during this year’s Eid al-Adha. The foundation’s main destination is Gaza, which is suffering from the Israeli blockade. In addition to Gaza, Yardımeli will make the people feel the joy of Eid al-Adha in countries such as Somalia, Syria, Sudan, Mauritania, Bangladesh, Malawi, Tanzania, Azerbaijan, Ethiopia and Bosnia and Herzegovina.

Yardımeli Foundation General Coordinator Osman İlhan said his foundation is motivated by the divine principle “if God has done a favor for you, you do a favor for others.”