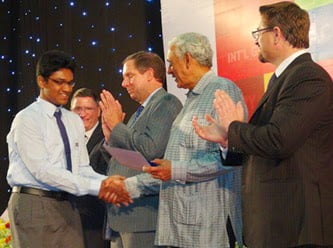 British Council Bangladesh Director Brendan McSherry said Turkish schools in the populous nation are one of the best international schools in the country. “They got the best results in this exam,” McSherry said, according to a quote provided by private Cihan news agency.

Mostafa said his teachers are not only taking care of his lessons but also lending support to everything of their students. “Since the day I entered from the door of this school as a kid, I have experienced a serious change in my life. I’m very thankful to my school for this reason,” Mostafa said.

International Hope Turkish Schools Deputy General Director Yavuz Koca said they’re operating in Bangladesh since 1996 and that they’re promoting the brand of the schools by success of their students. He said one of their students, Ragib, raised the name of his school and country in international arena by becoming first in the math exam. “We are exceptionally delighted over this. We congratulate our student,” Koca said.

Meanwhile, two students of the Turkish schools also became first in the country in the same exam. Zarin Tasneem became first from the trade class while Massoud Oraz, son of Afghanistan’s Ambassador, received the highest result from the Turkish class.